-Knows how to talk various languages

-Is a member of a jpop girl group

Ae-Jeong is a timid girl, she is ashamed of herself and does everything to not attract attention of people off stage. She is a member of a jpop girl group named Sugarcube Lolipop, in this group, she does partnership with Sayaka Mizuki, Hinata Nozomi, Renata Figueira, Chika Shino, Mizu Takara, Miyuki Hirasawa, Akemi Tomoko and Akane Tomoko. She's very shy to demonstrate love for her fans but when she do, she makes them happy.

Ae-Jeong lives with her father, stepmother, half siblings and grandmother in Shisuta Town. She moved to Japan after her father stole her custody after breakup with her mother who never get married with him. She was born in South Korea and lived there when she was a baby. Ae-Jeong is a victim of domestic abuse, she get beaten up constantly since she was a child by her father when he gets angry at something. Her stepmother is a model so, with her money, she bought a small house in Buraza Town for Ae-Jeong stay there in school days, in weekend she returns to her home. In first day of school in Akademi High School, Sayaka invited her to perform a musical test to enter in the group, since she was approved she entered the group who now consists with nine girls. When she was a new student in the school, she was bullied all the time being called "Korean Slut", but after she had performed with her group the same persons never messed up with her anymore.

Ae-Jeong have a long brown spiked hair and a long bang who cover the left side of her face. She have brown eyes and skinny eyebrows. She uses a pair of small pink balls earrings. She uses the default school uniform with a bandage in her right arm that covers a bruise that her father did, long white stockings and greyish black shoes.

Ae-Jeong doesn't have a good relationship with her father, he is ashamed of her and really hates his daughter, he only has her custody to make her mother regret not having married him before. He hits her constantly and abuses her psychologically. When he learned that she was in a girl group, he tried to get her out of the group threatening to evict her but Ae-Jeong said she would stay in the group, the expulsion did not happen thanks to the girl's grandmother.

Ae-Jeong never saw her mother, she was always in contact with her when she was a child but since the woman get married she never talked with Ae-Jeong again. When Hye-Jeong divorced, she went back to talking to her daughter but not constantly like before.

Ae-Jeong is very friendly with her stepmother, with the fact she is a model she never stays in home but when she stays she passes her time with her childs and with Ae-Jeong. Nari treats her like a daughter and loves her like one. Sometimes Ae-Jeong calls her "mom".

Ae-Jeong is very close to her grandmother, they have a good relationship and are very happy together. Ki-Myung save Ae-Jeong all the time she got hit by her father who ends with a mother and son fight.

Ae-Jeong and Ji-a have a big and young sister relationship, they loves each other and pass make up together. Ji-a supports Ae-Jeong and are a big fan of her voice.

Ae-Jeong never saw her sister, she already talked with her in phone and they sounds friendly with each other.

Ae-Jeong and Hinata was dating before the girl group was formed. Hinata used to love her and give gifts for her, the separation happened when Ae-Jeong was not having feelings for Hinata like she did, they was not talking and had a huge distance from each other. When the group was forming, Ae-Jeong and Hinata started to talking to each other again and now they are good friends and help each other, Ae-Jeong seens very jealous of Hinata when she become clingy with Renata. Ae-Jeong confessed to her and wants to become her girlfriend again, but Hinata rejected it and wants to be just friends with her, Ae-Jeong accepted it heartbroken.

Ae-Jeong and Sayaka are classmates and makes homeworks together, they are shipped by Akemi. They sometimes go to their houses and gossip about everything, they are best friends too, but just have this affection after Ae-Jeong joined the group, they was not this close before this.

Ae-Jeong and Chika are not very close, they doesn't talk too much because they doesn't have what to talk about. When Chika can, she try to talk with her with random conversations.

Ae-Jeong knows that Renata dislikes her because of her former relationship with Hinata, they are friendly but when they are alone, they have a rivality air. Ae-Jeong likes to provocate Renata everytime she gets.

Ae-Jeong thinks that Mizu are cute and started to talk with her when they entered the group, Mizu sayed to her that she finded her weird when saw her by the first time but they started to have a good friendship after have conversations. Mizu give opnions to her voice saying that she have a soft voice.

Ae-Jeong and Miyuki are close, Ae-Jeong is the third girl to not have fear of Miyuki and have a normal conversation with.

Ae-Jeong and Akane are like sisters, they love to be together. Ae-Jeong can be herself around Akane who is always helping her to like other boys and forget Hinata.

Ae-Jeong and Akemi likes each other's company, they complaint about something when necessary and have the same tastes but have different personalities.

Ae-Jeong have a deep crush on Masaki, she never tells him because he is in a relationship with Miyuki but if they breakup, she would be the first in queue.

Ae-Jeong with her father and grandmother

Ae-Jeong performing with the group 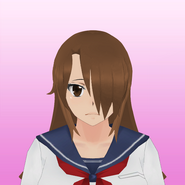 Ae-Jeong's portrait in game (by: CrabbyMeal)
Community content is available under CC-BY-SA unless otherwise noted.
Advertisement