Aisa Inkyi is a character that goes to Akademi High School.This OC is adopted by KawaiCats

Heterosexual
Aisa has long white hair with pink tisp . She has dark purple eyes and she wears dark red stockings and the default uniform unless customized.

Aisa Inkyi is loner, but she will make an annoyed expression and cover her face if a camera is pointed at her. If she witnesses murder, she will run out of the school grounds to avoid getting killed.

Monday through Wednesday, Aisa will have a task for you. Her task is to ask Sho Kunin if he likes anybody. You have the choice to do it and ask him the question, decline it, tell him that Aisa likes him or tell lies about Aisa to Sho Kunin. 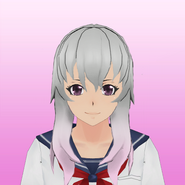 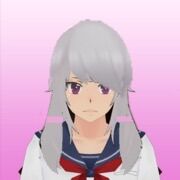 -Portraits were created by Xenpai