Amai's Mother, known as "Beika" by YandereDev, is the mother of Amai Odayaka in Yandere Simulator. She cannot be seen in the street of the town since the Odayaka Bakery is impossible to visit and is beyond the limits of the town.

Amai's Mother was born somewhere in the 1980's, so she is around 30-40 years old. At some point in her life, she met Amai's Father, and thus, the two started a bakery together called "Odayaka Bakery." Amai's mother can be seen in the street, standing at the counter in the Odayaka bakery. She is located beyond the accessible boundaries of the player, making it impossible to interact with her.

Amai's mother has fair skin and curly, light brown hair that reaches her shoulders. Her bangs meet in between her mint-green eyes. She wears an orange off-the-shoulder top, a long brown skirt, a white apron around her waist and brown high-heel shoes.

Before the April 15th, 2021 build, she wore a short-sleeved dark green shirt with a light green apron over it, as well as blue jeans and green slippers. She used the same model as Ryoba Aishi, but recolored.

In her first appearance from October 17, 2019, Amai's Mother wore the same hairstyle as her daughter, and had red eyes instead of green. She also wore blush.

On October 24th, 2019, she had a hair model of her own, but still closely resembled that of her daughter's. She no longer wore blush. As of December 4th, 2019, she got a unique hair model that was longer and darker.

Since Amai's mother is a secondary character who can only be seen in Buraza Town, not much is known about her personality. However, YandereDev says that she is sweet and gentle, just like her daughter and husband. The Odayaka family as a whole is genuinely wholesome and kind.

She loves her daughter. 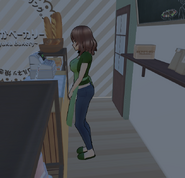 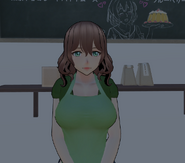 Her newest appearance.
Community content is available under CC-BY-SA unless otherwise noted.
Advertisement