Bullies, people trying to mess with her, Shiromi's pranking, losing her temper

Aoi Ryugoku was one of the original that attended Akademi High School in GhoulGirls90's Fanon. She was a member of the Student Council.

Aoi may be friendly and helpful but she can be also tough and short-tempered. She always appears in a tough look but it doesn't mean she isn't being friendly when anyone is trying to be nice to her for real. She is intimidating when anyone tries to mess with her or breaking the school's law. She can also feel remorseful when realizing that she hurt anyone's feelings who is innocent for offending her or had her annoyed.

Aoi is close friends with Shiromi and mostly hangouts with her. She often gets annoyed by Shiromi for her pranks on her.

Aoi was ultimately defeated and killed by Ayano, along with Megami, Shiromi, Akane and Kuroko, when they attempted to stop her from attacking the Akademi's population. 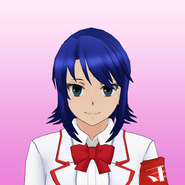 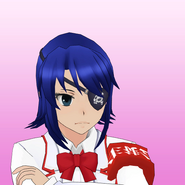