Thinking about editing? Im sorry but I can't let you do that This is one of S0ul245's OC's! You don't have permission to edit, unless you need to... add categories, fix gramma errors, typos or anything else that is considered a constructive edit

If you wish to edit anything else beside what was listed, please go to S0ul245's message wall and contact him.

Thank you! You can procceed

Aryiku is know to be the 'clown' of school.

Aryiku Mafu, is one of the non-canon female students that attend Akademi High.

Aryiku has two twin-tails that 'mostly pink but purple' that reaches her waist. She has bangs as well.

She wears the Sailor moon uniform and has purple to 'whitened' stockings.

She wears gold earrings and has a purple scrunchie on the left of her head.

Aryiku is rotten spoiled, sassy, jealous, annoying, and irritating to everything at school, she acted like this towards everyone constantly ever since her fourth grade of school.

Robotic Nemesis does not also approve of her behavior but is forced to still protect her at all costs.

In Aryiku's third grade of school, she was bullied, she had only one solution to her problems, acting annoying she did this for several years and she enjoyed it cause some people praised her actions around the school.

In her first year of Akademi, she kept acting like this but not for long, she started getting bullied back then this lead to harm.

After these events, she cried to her parents a lot to 'make' a solution. Her father is an inventor of many things, he had created a Robot to assist her, Aryiku was not happy with this so she demanded to make it so that the robot can come to school with her to protect her from bullies.

A few days later she brought the Robot at school, her bullies laughed at this, the robot had extremely powerful abilities. The robot single-handedly fought off her bullies. Aryiku brings the Robot to school every day.

She met a boy at school, Hazu Kashibuchi. Aryiku was seriously obsessed with him and wanted an immediate relationship with him. One day this was nearly destroyed because another girl, Sasha Nyuki is developing feelings for him as well. Aryiku demanded her Robot to 'put her in hospital'.

Aryiku stays with her at all costs.

Aryiku despises her and wants her dead. 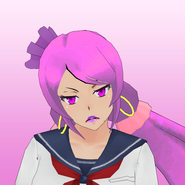 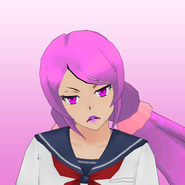