Atsu-chan (only by close friends)

She almost never makes eye contact with people. She simply says it makes her uncomfortable.

She is rumored to be able to read minds, but only a fool would believe that.

Atsuko has long, dark gray hair held in two twin-tails. Her bangs are messily swept to the side. Her eyes are a bright violet and seem to always have a light gleam in them, and are almost described as "able to see through you". She often wears short lavender socks that only reach a bit higher than her ankles.

Outside school, Atsuko sports usually casual clothing, such as simple T-shirts and jeans.

Atsuko is usually very quiet, she rarely speaks and avoids eye contact. She is known for seemingly knowing everything someone is thinking. Atsuko is often calm and collected, in reality she is actually quite worried about what others think of her.

Atsuko's early life was fairly normal. She did not live in poverty nor was she rich, she had good relationships with her family, and was a very average child. Though, one thing about her was different, and once she became mature enoug to realize it, her life was slightly altered.

At the age of eight, Atsuko realized that by making eye contact with others, she was able to read their minds. Once realizing this, she was quick to start avoiding eye contact, feeling as though she'd learn things she did not want to know.

Once in middle school, other students began spreading rumors about her strange eyes and her disliking of making eye contact, some saying she could see ghosts, others claiming she had vision that was above perfect, some even believing she could see things too small for the human eye. Alas, these rumors were all false, and she was quick to deny them.

In her first year at Akademi, rumors yet again spread, some good, some bad. Because of this, her reputation was a little below average, though she was never bullied or anything of that sort. Another rumor began, claiming she could read minds. Not wanting to lie, Atsuko never denied the rumor, but never confirmed it either. In fact, she never spoke about the rumor at all, changing the subject whenever it was brought up.

"Oh, why don't I make eye contact..? Well, it's just a bit uncomfortable for me, that's all" 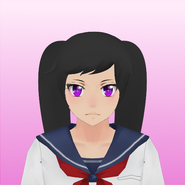