Ayano is a fair-skinned female with black hair and dark, dull gray eyes. Her hair is tied back into a ponytail most of the time but when going to bed it is out of her signature ponytail. She has an average build and not-too-big breasts. She seems emotionless and often wears a facade to hide her true intentions.

She is seen as emotionless and she personally described her life dull and colorless. Like most yanderes, she is two-faced. On the outside she acts somewhat cold but creepy and innocent meanwhile on the inside she is a merciless sadist that will do anything to get her object of affection, Taro Yamada. However, all of her true nature was hidden away from herself prior to meeting Taro.

Ayano states in her diary that she couldn't experience emotions and that the world made her feel more empty. She also shows signs of minor depression in her diary. One day, emotions she didn't even think really exist formed right when she met Taro. She soon became obsessive, stalker-like, and more jealous over Taro. Apparently she did start feeling very, well, sensual towards Taro besides her obsession over him. She is murderous deep-down inside so she won't hesitate to murder anyone that shows any interest in Taro or will convince them to not to try to get close to him.

At the beginning of the story, Ayano is obsessing over Taro without his acknowledgment, well, besides the fact that he is getting paranoid because of her stealing his stuff to put into her Senpai Shrine. Their relationship is more of a one-sided yandere love.

Ayato is Ayano's twin brother and are very close together. They work together well and both are yandere. However, Ayato is more of a mild yandere.

Info-chan assists Ayano with finding information on her rivals and blackmailing them or getting them into deep water. They are more associates than friends; that is the relationship she has with about everyone else minus the rivals and others that may be specified as a family member or friend.

The rest is coming soon...

Statistics are on a 0-5 scale. 0 being the lowest and 5 being the highest.

"Senpai, don't you see that we are made for each other?!" - Looking at a picture of Taro talking to Osana.

"Ayato seems to have taken a liking to you, Maiyu." - To Maiyu talking about Ayato and his clear crush on Maiyu. 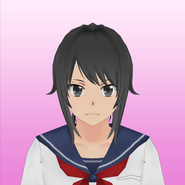