One of the most hard-working and intelligent students in school. Can get so obsessed with studying that she forgets to take care of herself.

Her flaws are balanced by the strengths of her best friend, Dafuni Bureiku.

Beruma has short, bobbed dark purple hair. Her eyes are blue, and her face is dotted with small freckles. She wears the default uniform unless customized by the player. Brown framed glasses are placed below her eyes, and a camera around her neck. Her bust size is 1 and her eye type is serious. She uses the scholarly walk and idle animations.

Beruma is a Sleuth. When the atmosphere is above 80%, she will act on the Social Butterfly persona upon witnessing murder or discovering a corpse. She will do a cute pose if a camera is pointed at her. However, if the atmosphere is below 80%, she will act upon the Phone Addict persona instead. She will give a suspicious look if a camera is pointed at her face.

She is also said to be studious and intelligent. Her profile states that she can get so caught up in schoolwork, she forgets to take care of herself. 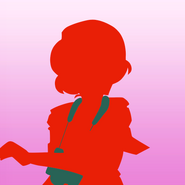 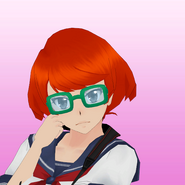 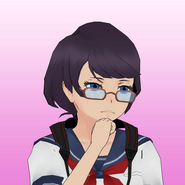 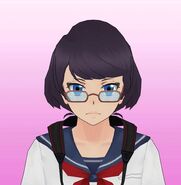 Base pose by User:MissDapperKat
Community content is available under CC-BY-SA unless otherwise noted.
Advertisement