President of the Martial Arts Club. Inherited the club after defeating the previous president.

Seems to be incapable of turning down a challenge.

Budo Masuta is one of the male students attending Akademi High in Yandere Simulator, and the president of the Martial Arts Club.

"Budo is a popular figure in Akademi High, known for his friendly and approachable attitude, his powerful physique, and his undeniable skill at martial arts. Ever since he became the leader of the Martial Arts Club, he has maintained a 100% winning streak, and is considered to be the strongest student at school.

Budo became the leader of the Martial Arts Club after defeating the club's previous leader, Raibaru, who resigned after being beaten by her own pupil. There are rumors that the reason why Budo dedicated himself to martial arts is because he developed powerful romantic feelings for the club's previous leader, and desperately wanted to impress her. Budo always changes the subject when asked about this topic, neither confirming nor denying the rumors.

Budo very rarely speaks ill of others, but has been known to express a strong distaste for bullies and delinquents. He is quick to rush to the aid of anyone that is being harassed by other students, making it clear that 'If you pick a fight with them, you're picking a fight with me, too!'"

Budo has fluffy dark grey hair that fans to his right, opposite of Haruto Yuto. His eyes are light grey. He wears the default uniform unless customized, and a headband with Japanese text on it if the Martial Arts Club is active. Since he is a club leader, he wears a red armband with the Ying Yang on it on his left arm.

Budo is Heroic. He will give a suspicious look before crossing his arms if a camera is pointed at his face. If he witnesses murder, he will try to apprehend the player, which results in the struggle minigame. If he wins, the player will get the APPREHENDED Game Over. If he loses, the player will stab him in the forehead, killing him.

Budo was the only one who beat Raibaru Fumetsu when she was the club leader of the Martial Arts club. After he defeated her, she made Budo the club leader and left the club. However, they are still good friends. 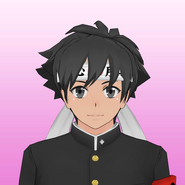