-Very annoying with people, including her family

Chihaya is a grumpy girl, she easily become angry and rude, she rarely smiles but when she do, something is wrong. She can help her classmates and become friendly but in a shortly time. She is bipolar too, she can smile a little and in other time she can be very angry. She is loveable to her family, they call her "Chi-chan" anytime, Chihaya can be called "Shrewish Girl" or "Angry Ant" by her classmates who just wants to see her red face in rage.

Chihaya grow up in a loveable family, her parents work together in a company of technology. They doesn't have time for her when she was a kid, in this period, she was very happy and kind, the only reason why she is grumpy with everything is because her parents was never in home to be with her, she got revolted by this. She was very spoiled and is her family's sweetheart.

Chihaya is a Japanese girl with medium-short black hair cut horizontally up in the front with large thin wicks on the sides with thin little eyebrows and light gray eyes, she have a pink tiara in her head and have three polka dots bracelets in her left arm, one is yellow, one is blue and the other one is pink. She wears the default school uniform and have a blue-green 3/4 socks and a pair of purple-blue shoes.

Chihaya have a crush on Haruto, the main reason is because he is very strong and knows how to fight, she do everything for not be noticed by him.

Chihaya is very close to her mother, they hang out and go to places together. Because of Atsuko's young appearance, some people thinks they are sisters more than daughter and mother.

Hiroshi loves to tease Chihaya, she hates when he plays with her, but sometimes she laughs with her father's tease. They love each other and are very close.

They seens to love each other and plays videogames together, sometimes Chihaya steal his cap to make him stop talking about her to other people when she is around him. She loves her brother and is capable to defend him to everyone.

Chihaya loves Hinata like a sister, she have a lot of skinship with Hinata when she goes out with her and Hiroto. Chihaya likes to hug her and hold her hands, sometimes Chihaya thinks herself is starting to develop a crush on Hinata.

Chihaya and Kaiyo are classmates and she had a deep crush on her, Chihaya thinks she is cute and they was very close, after Chihaya discovered Kaiyo was having a crush on Jiro Senri, she got a long distance from her. Before the discovery, Chihaya was very friendly and kind with her, Kaiyo was the only person who could calm her down and have a skinship-like affection. After Eri's death, Chihaya was afraid of Kaiyo because of her exaggerated happiness with her death.

Eri and Chihaya was classmates and friendly with each other, Chihaya felt a good energy towards her and loved to have conversations with Eri. After her death, Chihaya feels alone sometimes and makes an effort to talk to someone. 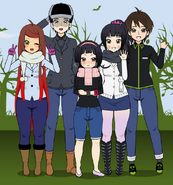 Chihaya freezing with her family and her sister-in-law 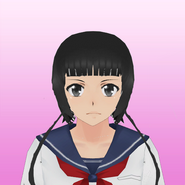