Chouko Akumu is created and is owned by Theifyssoul (DA) / Theifysnightmare (On Wiki). Please do not use without permission. Thank you

The original full reference sheet if you are interested - Chouko

Chouko appears to be 5'7 in height with a medium to average build and a D bust. She has two layers to her hair, with the lower layer tied back by a rainbow ribbon. Her natural colour is violet. She has grey-blue eyes, they are normally closed and only really open when she's gone 'Yandere'. She has a normal skin tone, and her fashion tends to be what catches her eye, though she has little interest in cloaths and what's 'in'

She tends to have a rather friendly and helpful personality, she will willingly volunteer to do jobs for teachers and often attends Student Council meetings. At least that's the mask she wears in school and around others... in truth shes rather shut off and cold. If you have no leaning to jer existence she cares very little about you. Chokou tends to hide behind her mask unless there's a reason to drop it... in essence, people who see through her facade hates the most.

She is rather obsessive and will stalk those she feels she has a relationship with, she isn't afraid to kill to get what she wants, and will at times turn up at her obsessions home, making him/her feel extremely uneasy. She is known for Braking and entering to take items from the lessons some such as clothing or even use the same hairbrush to much more extreme things

Mitsuru - is the only person to date that knows about events in Choukos past, Misturu can come across perverted and lewd around her friend and has a strange obsession with Midori, loving to draw the girls in...curtan..situations

• Relationship with Ayano Aishi? (Yandere-chan): - Chouko doesn't think highly of Ayano, though at school she is polite to her, she just feels uncomfortable and sees her as rather dangerous

• Witnessing Murder:  This will trigger her memory of her parents' death and make her have a break down to which she will scream and clutch at her head.

• Discovering A Corpse(s): She will become rather pale though will also seem indifferent shes seen dead people. But will also inform a teacher

• Discovering Blood:  Chouko is rather indifferent to this and will complain about the mess before informing a teacher

• Witnessing Yandere-chan Visibly Insane:   Just walks on. There's a lot of strange people at her school

• Witnessing Yandere-chan Holding A Weapon (Bloody and Not):  Chouko will become rather worried and will instantly try to contact Osana to make sure she's safe.

• Witnessing Yandere-chan taking panty-shots:  Finds this rather disturbing and perverted. Turning an upper lip at the situation

[3:50 PM – 4:30 PM] if she catches a glimpse of Osana she will follow her or join them for a walk under the pretence of talking about school subjects

[4:30 PM – 5:00 PM] will meet up with Mitsuru and heads home with her before breaking off and heading into her home to eat dinner and do homework

In this end, Chouko never confesses to Osana and just continues to watch her and seems to just be a close friend for Osana to go to when Taro is being difficult that day.

The conversations always ending with Osana telling Chouko shes happy to have someone listen to her rant to which Chouko replies that she will always be here for her should Osana ever need her.

In this route, she pretty much kills people that hurt or annoy Osana but not Taro as she knows that's Osana's love interest.

In this end, Osana has confessed but was rejected and now feels defeated. She talks to Chouko about her feelings and how much he hurt her.

Chouko listens and tries to calm the crying girl down before she does the only thing she can think of and kisses her. After a moment and Chouko lets her go before confessing that she has liked Osana since the first day of school, and even more so since they became friends.

She states that she knows she's a girl but believes she can protect Osana just as good as  Taro and that she won't let anything happen to her. After that Osana states that she needs to think about this and leaves her. Chouko believing shes screwed up and begin to lose herself and refuses to go to school for a few days, leaving Osana to visit her and begins by telling her off and how much of an idiot Chouko is...before saying that she accepts Choukos feelings and would like to try dating.

Should Ayano near Osana, Chouko will be there to look after her.

In this ending, Choukos Yandere personality is more prominent. This starts after Osana tells her she plans to confess to Taro - Senpai about her feelings. After these were accepted, Osana starts dating Taro much to Choukos displeasure.

Of course, this also angers Ayano who in turn kills Osana, though she frames Oka for this. Osana is presumes missing at first which makes Choukos yandere personality show more, hunting down Taro first and begins to threaten him. When news reaches the school and an assembly is held to share the news of Osana being found dead.

Of course, Chouko snaps at this and after going home and destroying everything in her home, she falls into a depression which makes her worse and starts to skip school. she soon gets sent a collection of photos and a letter that shows Oka using Osana as a sacrifice. Of course what Chouko doesn't realise is that its Ayano dressed up as Oka!!

Chouko goes to school the next day looking pale and dishevelled. Picking up a pair of scissors on her last lesson she heads to the Occult Club. She starts to yell at Oka and begins to torture and beat her, telling Oka that she'll make her disappear like she made her Osana disappear. Of course, this doesn't happen as Oka is saved. 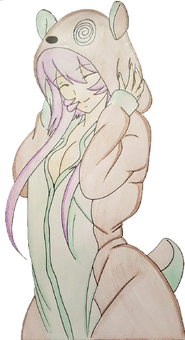 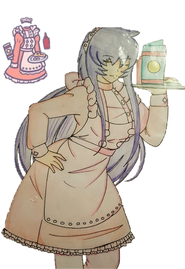 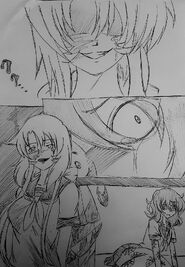 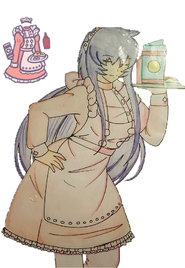 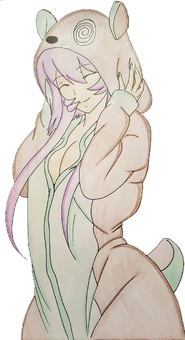 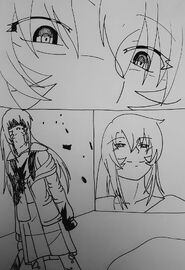 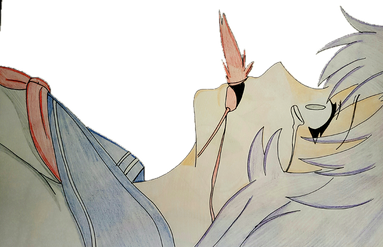 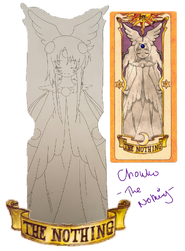 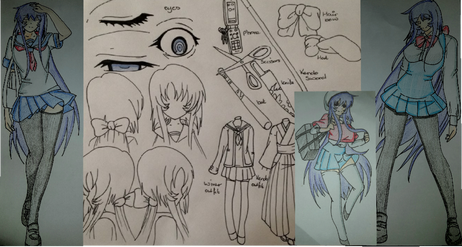 Chouko Genderbent and with others