Copper Streak is one of the old female delinquents. As of the Delinquent Update,she has been removed, however, she is in 1980's mode now.

Copper Streak has dark brown hair with copper streaks on both sides. Her hair is short with straight cut bangs. Her eyes are an orange-brown. She wears a white mask over her mouth with "くそ", which is Japanese profanity. She holds a kendo, also known as a bokken, over her shoulders. Copper wears the default uniform regardless of customization. She never changes her shoes, and thus wears her black loafers all day.

Copper Streak does not have a "real routine," as she is not a "real character." Back when she existed in gameplay, she and the rest of her gang would stand with their weapons beside the incinerator. They do not move unless they witness murder, or if they see the player holding a weapon. When she is not present, there would be a timer. When the timer runs out, she would magically appear with the rest of the delinquents. 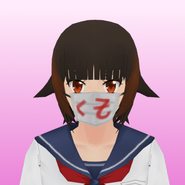 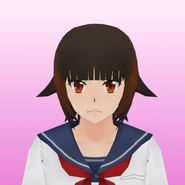 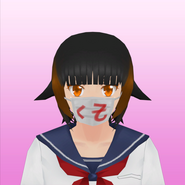 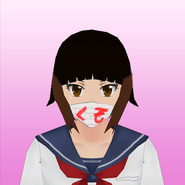 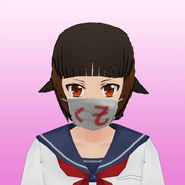 Another portrait by Shin Higaku The Occult Club PE Leader
Community content is available under CC-BY-SA unless otherwise noted.
Advertisement