Grew up with maids and butlers taking care of her every need. Highly concerned with her appearance and clothing at all times.

After befriending Beruma Dinkuri in junior high, the two of them became inseperable, despite being polar opposites.

Dafuni has long light brown hair with a rather large ahoge sticking out from the top. Her eyes are pink. She wears the default uniform unless customized, along with a light purple headband and scarf, a camera around her neck, and pink eyeshadow.

Dafuni is a Sleuth. When the atmosphere is above 80%, she will act on the Social Butterfly persona upon witnessing murder or discovering a corpse. She will do a cute pose if a camera is pointed at her. However, if the atmosphere is below 80%, she will act upon the Phone Addict persona instead. She will give a suspicious look if a camera is pointed at her face. 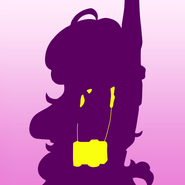 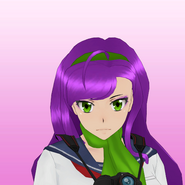