-Have obsession with anything

Fuyuko is talkative, annoying and sticky. She can be very possessive and obsessed with something or someone she likes, mainly with Yoshi Shinozaki, her crush. She hates when someone approach him or touch him. She is a professional stalker and stalks everything that Yoshi or someone near him do. She have obsessive-compulsive disorder.

Fuyuko was born in Buraza Town and lives with her parents and younger brother. She was born with albinism, her mother and brother have the same illness, because of this, since she was a baby she protects herself from the sun. She suffers bullying because of her illness and sometimes she ignores the bullies. Since little, she have an obsession with her younger brother and had the need to protect him in all costs. When something is out of place, she gets angry and strange and arrange everything, it was very exaggerated and her parents led her to a psychiatrist and the girl was diagnosed with obsessive-compulsive disorder. When she started to study in Akademi High School, she learned how to deal with bullies and since then, she was not bullied anymore.

Fuyuko have long blonde twintails hold up by two blue and pink candies ties, she have horizontal bangs and a purpleish-pink clip in "X" format in the left side bang. She have purple eyes and not too skinny eyebrows. She uses the default female school uniform with a hot pink shirt behind, she uses a pair of purple gloves, the left one is dark and the right one is light. She wears grey pantyhose and white and blue indoors shoes.

Fuyuko loves her mother. Tsukasa take great care of her because of her albinism forgetting that she have the same illness. They go out together in a black umbrella.

Fuyuko and her father are like best friends. Akio make sure to see if she is protected to go out and check her out everytime. They love each other.

Fuyuko have an obsession to protect her brother. They both together with their mother have albinism and dislikes to use shirts with long sleeves. She loves him and love to hug his small body.

Fuyuko and Yoshi doesn't have a friendship. Fuyuko have an obesessed crush on him and stalks him everytime. Yoshi fears Fuyuko and try to protect Saori from her. Fuyuko tries to protect him from Harushi but he really doesn't see the reason why she would do this if Harushi doesn't do anything to him. When he talks to her, she "melts".

Fuyuko and Saori is not very close. Saori knows that Fuyuko have a crush on Yoshi and likes to make her jealous kissing his cheeks or hugging him. Fuyuko stalks her everytime she have the chance and do everything to keep her away from Yoshi.

Fuyuko and Harushi hates each other, Fuyuko try hard to protect Yoshi from Harushi but ends up being slapped out. Harushi knows that Fuyuko stalks Saori when she is with Yoshi and take Fuyuko away from them. Harushi sometimes bully her because of her albinism.

Fuyuko and Mayoi are suspicious when they are together. Because of Mayoi's cocky behaviour, anyone who sees them together, thinks that they will do something wrong with someone. Mayoi notice when Fuyuko stalks Yoshi and try hard to make her join the Killers Gang. 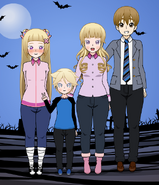 Fuyuko with her family
Community content is available under CC-BY-SA unless otherwise noted.
Advertisement