Former president of the Light Music Club. Established her club on a whim, and only used it as a place to hang out with friends. After Miyuji demonstrated a desire to do something meaningful with the club, Gita happily transferred ownership of the club to Miyuji. Plays guitar.

Gita Yamahato is a female student who attends Akademi High in Yandere Simulator.

Gita has long, dark violet pigtails, and her right eye is covered by her long bangs, which are colored green. She wears a white musical note shaped clip in her hair. Gita also wears dark green eyeshadow to match her green eyes. She wears the default school uniform customized by the player, and wears green thigh-high stockings that fade into purple, the same colors as her hair.

Gita is a Social Butterfly. She will pose cutely if a camera is pointed at her. If she witnesses murder, she will run to a heavily populated area and call the police.

When you will ask Gita if she needs help with anything, she will tell you that there club leader (Miyuji Shan) was a completely different person last year. After, she will tell you that she isn't sure if Miyuji is showing her true self right now. She will ask you to find Miyuji's spot, to take a photo of her, and to show it to Gita. After the player completes her task, they will befriend her. 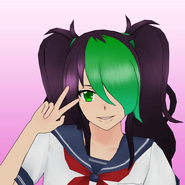 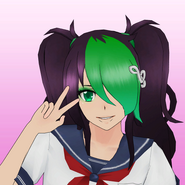 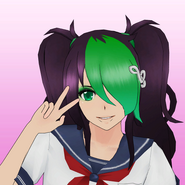 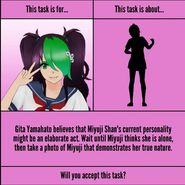 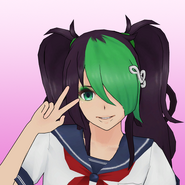