Hanako Yamada is the ninth rival in Yandere Simulator. She is extremely possessive of her older brother. If Ayano does not eliminate her before Friday, she will convince Senpai to promise not to get a girlfriend.

"Hanako is Senpai's younger sister. She loves her big brother more than anything in the world, and depends on him for almost everything. She is very possessive of him, and becomes upset when he won't spend time with her.

After nine weeks of gameplay, Hanako decides that she just can't bear to be enrolled in a different school than her beloved brother, and transfers into his school so that she can be with him all day long.

Hanako is deathly afraid that if her brother gets a girlfriend, he'll forget all about her and refuse to spend time with her. She has made it her mission to stop him from getting a girlfriend at all costs so that nobody else can have her big brother's attention. Senpai would never want to do anything that would make his little sister cry...this would spell doom for anyone who has fallen in love with Senpai."

Hanako's default appearance has black hair styled in short pigtails, with her bangs partially held back by a red heart-shaped hair clip. Two naughty strands of hair hang down on her forehead. Her eyes are light grey. She wears the default school uniform. Unlike the rest of the rivals, she does not have any special panties or stockings.

If Senpai is customized, Hanako's appearance will change to match his, as they are siblings.

As of now, Hanako's personality is described as clingy, childish, and bubbly. She's best described as an "imouto," a popular anime trope for 'cute little sister' characters. In older concepts, she was meant to be lewd and seductive in order to seduce Senpai. These changes were intended so that the player would feel less guilty when eliminating her.

Hanako loves her older brother more than anything in the world. She strongly opposes the idea of her brother getting a girlfriend, meaning less attention for her. It's going to take a lot of effort to get through her.

Hanako and Osana played together since they were very young children, and thus, they have a bond. Osana is the only girl Hanako would be willing to "give" Senpai to.

Since Hanako is very emotionally dependent on her brother, she will never leave his side and be with him at all times. However, she has not been implemented, so her routine is not finalized. 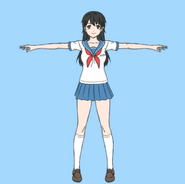 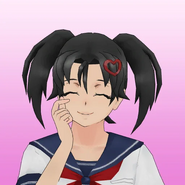