Hideki Aoyama is an OC created by Redandsymmetry.

Hideki has light blue hair in the same style as Haruto Yuto. His eyes are dark brown. He wears male Uniform #3, and a cravat when he is in the Drama Club.

Hideki is a Teacher's Pet. If a camera is pointed at him, he will give a suspicious look. If he witnesses murder, he will report it to his teacher. However, if Cocoa is murdered in front of him, he will attempt to apprehend the murderer.

Katsuo Aoyama - One of Hideki's two brothers. Katsuo is the oldest brother.

Masato Aoyama - Hideki's other brother. Masato is the youngest brother.

Cocoa Hanakura - Hideki has a crush on Cocoa. He usually stops by her club on his way to the Drama Club to visit her.

Hideki's task is to find his play script, as it has gone missing. It can be found on the floor of Classroom 3-1, near his desk. If the player finds his script and returns it to him, he will become their friend.

After the player completes his task, they will have the option to ask him about his crush. If they stalk him after school, they will find that he visits Cocoa Sakuta in the Cooking Club for a little while everyday before he goes to his own club.

When asked about his crush on Cocoa by the player, he will confirm that he does in fact have a crush on her. After this, the player can help him to win Cocoa's heart everyday until the meter is full. On that day, both students will confess their love for each other, and will then become a couple. 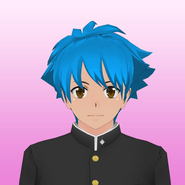 Alternate Portrait (By Betapekoyama) - No cravat 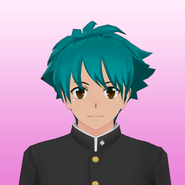