A bright and cheery girl known for her undying loyalty to her friends. Will fiercely support her friends when they in trouble, sometimes in an overbearing way.

Himari Fujita is one of the female students attending Akademi High School in Yandere Simulator.

Himari has long, dark blonde hair kept in a long side-tail to the left. She has a thick strand of hair in the middle of her forehead. A blue flower sits on the left side of her head. Her eyes are sapphire blue. She wears the default uniform unless customized by the player.

Himari is Heroic. If a camera is pointed at her, she will give a suspicious look. If she witnesses murder, she will try to apprehend the player, which results in the struggle minigame. The struggle minigame against Himari would be relatively easy, as she is very weak. If she wins, the player will get the APPREHENDED Game Over. If she loses, the player will stab her in the forehead, killing her.

She is described as being bright and cheerful. She is loyal to her friends, though sometimes this protectiveness can be over bearing.

3D render of all Gardening Club members by qvajangel (outdated). 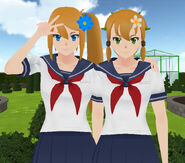 Himari and Tsubaki together by qvajangel (outdated). 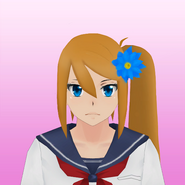 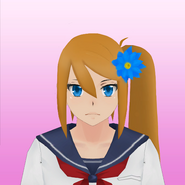 Portrait by KuuderessioPlusvalín
Community content is available under CC-BY-SA unless otherwise noted.
Advertisement