A bright and cheery girl who is known for undying loyalty to her friends. She would always fiercely support her friends when they in trouble or need help, sometimes in an overbearing way. Presumed to be killed at first in massacre, but is turned out to have survived from her wounds, who was brought to hospital. She is also now the leader of the Gardening Club.

Student of Akademi High School
President of the Gardening Club

Himari Fujita is the tetartagonist and one of the original students before the massacre at Akademi High School in GhoulGirls90's Fanon. She is the only original member and currently the president of the Gardening Club.

A bright and cheery girl who is known for undying loyalty to her friends. She would always fiercely support her friends when they in trouble or need help, sometimes in an overbearing way.

Presuming that you have eliminated her in massacre at first, but turns out, she somehow survived from her wounds who was brought to hospital. She is also now the leader of the Gardening Club.

Himari has dark, blonde hair and straight bangs with one strand of hair on her forehead. She has blue eyes and a long, straight side ponytail to the left, with a blue lotus resting on the left side of her hair.

She wears a high collared white blouse worn under a green-lined black blazer and bright green bow, accompanied with a dark grey skirt and green shoes. She also wears green stocking by her legs.

If her club got disbanded, she will no longer wear her blue lotus by her hair.

Himari is bright and cheerful girl. She fiercely would support her friends when they need help or in trouble, considering that she is helpful. She can be sometimes protective because she doesn't want anyone to get harmed.

One year later, in the aftermath of Akademi High School massacre, she became lonely and depressed due to loss of her friends and their school being destroyed as hell, but hardly tries to move on. She blamed herself for not being able to protect her friends. Her level of protectiveness drastically increases when she unexpectedly reunites with Simon, Saki and Kokona. She promised herself not to also let them get harmed due to the past incident at Akademi High School. Himari becomes paranoid, thinking that the same thing one year ago might also happen on them. Similar to Simon, Himari wants justice and does not also like injustice, especially for the demise of her friends when she later discovers that Ayano is their killer.

Himari has the Heroic persona. Because Simon had revealed about Ayano's true colors to her, the player cannot interact with her since she is now aware how dangerous Ayano is and would simply try to avoid her by refusing to talk to her. If Ayano aims a camera at her, Himari will sternly look at her in a suspicious look. If she witnesses murder, she will attempt to apprehend Ayano, but is very incapable of stopping them. However, struggling against Himari will alert Robot-chan and she would go quickly stop Ayano before Himari could get killed, which means Himari can't be also killed. If she also sees Ayano holding a weapon, she will walk briskly away from her. It's not very possible to catch up to her because her speed is faster than her.

As Simon, Himari will strike a cute pose like the students with Social Butterfly persona when a camera is aimed at her because she really knows Simon is a true good friend to her. She can be interacted with.

Last year, Himari does not know about Simon much but they did had interacted with each other once.

It's later shown that Himari likes Simon and does not hesitate to help him if she ever feels he is in trouble. Due to what happened recently to their old Akademi High last year, Himari is reluctant to let Simon risk his life just to protect her and the others. She can be somewhat fiercely protective to him due to worrying for his safety. Because of this, Simon would sometimes hide his problems from her because he doesn't want her to worry about him too much.

If Saki dies, Himari will be sad for the loss. Simon may also become her suitor because Himari will eventually develop a crush on him.

Uekiya and the Gardening Club members

Himari was friends with Uekiya and the Gardening Club members and enjoyed spending time with them. Aside from the club's leader, some of them sometimes feel shy to ask help from her, especially if they ever got bullied. She cares them more and doesn't want them to get harmed.

In the aftermath of Akademi High School massacre, she learns that all of her friends and the rest have been killed after being woke up from her coma at Shisuta Hospital. Himari was extremely upset and heartbroken and even blames herself for not being able to save and protect them.

Sometimes, Himari gets a nightmare dream of how Ayano brutally murders her friends that horrified and traumatized her. Angry at Ayano for what she did to her friends, Himari promised her deceased friends to avenge their deaths by bringing Ayano to justice but later gets a negative thought that dealing with her may not be easy after what Simon told her about Ayano's ability to hide her true motives from anyone else.

Himari doesn't know much about Ayano at first as if she's a stranger to her.

One year later, however, she soon learns from Simon about Ayano's true colors. It horrified Himari to learn that Ayano is the one who had everyone else, including her friends back at the old Akademi High School died. As a result, Himari is very hostile towards Ayano. She likely has a sense of justice against her and probably angry upon finding out that Ayano was responsible of murdering her friends. Ayano will recognize her and gets surprised upon seeing her still alive but will pretend to be concerned and curious how she survived the accident when attempting to talk to her, though Himari is secretly not convinced with her fake concern. If Ayano tries to talk to her, Himari will refuse but says it politely by pretending that she has no time to have a word with her since she is now aware that Ayano is dangerous and couldn't take the risk to anger her that might make her threaten her life.

Himari's task is only available to Simon.

Himari states that the delinquents are constantly harassing her clubmates and they eventually approached her and asked for help to make the delinquents leave them alone for good. But in case if the delinquents will respond of attacking her violently, she isn't strong enough to confront and might end up getting hurt by them. Though hesitant at first due to her more protective personality, she will let Simon help her confront the delinquents and asks him to not get in trouble and get hurt. To achieve this task, Simon must go and meet the delinquents to confront them about the problem of them bullying some Gardening Club members and sternly asks them to leave them alone. Humoura and her delinquent gang doesn't really care if they hurt anyone or not and bluffs at Simon if he's going to report them to a teacher. Simon completely ignores Humoura's word as he says that it sounded like they need to be taught a lesson about having some right manners. Humoura asks him if he thinks he's tough and then asks her gang to give him some bruises and crack his skull and the fight begins. Simon manages to overpower them and they lost the fight and they complain that he is like a beast. Simon manhandles Humoura and threatens her that next time if he sees her trying to hurt anyone, they are tasting another pain from him. Now afraid of him, she cowardly fleed, along with other delinquents. Simon must then return to Himari and let her know that the delinquents have been dealt with and that they should be leaving her clubmates alone for good. Himari will happily thank Simon for helping her clubmates off the bullying. 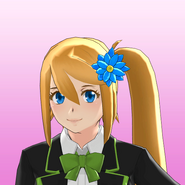 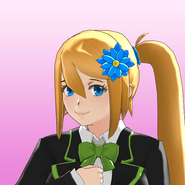