This OC is owned by Xenpai. Please ask for permission before using. Have a nice day.

She has short, dark blue hair with bangs covering her left eye. She is a bit chubby. She wears Uniform 1 with yellow seifuku tie, And Uniform 5 with a yellow scarf.

She is silent and calm with a slight smile most of the time. She has a habit of getting confused between putting -kun and -chan to the right gender which most people get mad at. She is incapable of defending herself and is weak compared with other females at her school.

Hitomi was born in a rich family, Her mother, Ryou Kazumi, was a teacher and her father, Kogoro Tamura was a business man. Her father always had to travel a lot, So Hitomi was with her mother in the house. Her mother wasn't much kind in her husband's absence. She completely ignored her daughter and all she cared about is her work. Meanwhile, when Hitomi was 14 in Junior High, Hitomi had many friends due to being socially savvy. She felt happy, But that didn't last a lot. Her best friend at school, Hyori died in a car accident. Hitomi was in deep depression for that, But could cheer up a little bit by time. Hitomi's father died a month later in a plane crash when he was flying back to Japan. Hitomi was lonely and cried everyday, She had an ignorant mother and her father died. Her sadness affected her relationships at school since she scared anyone who'd talk to her by her always-sad face. In her 16th birthday, Ryou left Hitomi to her grandmother in Buraza Town to live with as she was too busy. She was more lonely without any friends or someone to talk to, Which made her develop claustrophobia. After attending Akademi, She tries to hide her real feelings by a slight smile to make new friendships. However, She cries everyday at home. 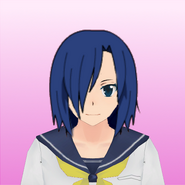