Hitoshi Akiya is an OC created by Redandsymmetry.

Hitoshi's life was mostly good for a while. He had a nice, caring mother, a hard-working father, and a cool older brother. Everything was going great, until one day when Hitoshi was 14. That was the day his father found out that his mother was cheating on him. Instead of confronting her about it, he decided to take his anger out on Hitoshi. He was beaten daily for something that wasn't his fault, his father even going so far as to leave cuts on his body.

One day, Hitoshi's brother Jurou heard Hitoshi screaming from his room and decided to investigate. Once he seen what was happening, he tried his best to protect Hitoshi from their father. However, that didn't go too well for him. Kouzai only became angrier and attacked Jurou, leaving him with many bruises and a black eye afterwards. Unfortunately for Hitoshi, Jurou was too afraid to try to help him again.

The abuse continued on for a while after, until finally Jurou came up with a plan. He set up hidden security cameras in his brother's bedroom, hoping to catch his father's actions on video. Surely enough, this plan worked out quite well. Once Jurou had the footage he needed, he took it to the police. They arrived back at the house shortly after, catching Kouzai in the middle of beating Hitoshi again. They arrested him and took him off to jail.

It wasn't discovered until that day, when a police officer had taken Hitoshi to the hospital to ensure he would be okay, that he had also self-harmed during that period of time. He had attempted to make himself bleed to death by leaving deep cuts in his wrists, though he had not succeeded.

A few months after Hitoshi began his second year at Akademi High, his brother Jurou had gotten into an accident due to the driver of the car being drunk. Most of the people in the car were lucky, though Jurou was not. He had sadly been killed in the crash, and his body had become nearly unidentifiable. This day is still a sensitive topic for Hitoshi, as he considered his brother to be his best friend.

Now, Hitoshi's life is slowly getting better. He began to date two other boys and he has just become a happier person in general.

Hitoshi has red hair that somewhat covers his right eye. His eyes are red as well. He wears uniform 1, and somehow manages to keep his sleeves in place all day. He also wears a heart shaped locket that contains some of the ashes of his deceased brother.

Hitoshi tries his best to be nice, however he is easily angered. He isn't the most sane, and he would not hesitate to attack another person if they were to try to harm his friends, family or lovers.

Hitoshi is a Sleuth. He is cheery and playful in high atmosphere, but if the atmosphere is low, he will be cautious. He will try to snap pictures of the murderer in the act, and if he manages to, he will send it to the police.

Hitoshi has one task.

Hitoshi has lost his camera from the Photography Club. If someone finds it and returns it to him, he will become their friend.

Haruto Yuto - Hitoshi used to have a crush on him, but dropped it after he learned that he had made fun of his 'friend' when his 'friend' confessed to him. He had a deep hatred for Haruto due to the things that he did to Hiroyuki. Though, he eventually let go and forgave Haruto. He soon fell for him again, though his feelings for Hiroyuki remained.

Koharu Hinata - Hitoshi used to have a crush on her until he discovered that she was already in a relationship with Inkyu Basu.

Jurou Akiya - Hitoshi's deceased older brother. Before Jurou's death, the two of them were very close and had many things in common. One day, when Hitoshi was being beaten by their father, he had tried to save Hitoshi and stop Kouzai. However, this didn't work, and he had only gotten himself hurt. After that, he had been too afraid to ever try again. Hitoshi blames Jurou's death on one of Jurou's friends, who was the driver of the car. Whenever Jurou is mentioned, Hitoshi cannot help but to burst into tears.

Kouzai Akiya - Hitoshi's father. When Hitoshi was 14, Kouzai would physically abuse him daily, and even hurt his other son Jurou when he tried to interfere. This went on for a while until one day Hitoshi's mother, Suzume, found out about it and got him arrested.

Suzume Akiya - Hitoshi's mother. She saved Hitoshi from her husband, Kouzai, when she found out that he had been physically abused by him for a while.

Ran Murakami - They have a mutual hate for each other. Despite having incriminating evidence against her and Sachi, he has not yet been able to get them arrested.

Kaori Sasaki - They are close friends.

Sachi Miyara - Hitoshi swears that she's a murderer and will not stop until he proves it. Despite having incriminating evidence against her and Ran, he has not yet been able to get them arrested.

Hiroyuki Akane - Hitoshi's boyfriend. They started dating in a roleplay you can find on Hiroyuki's page. 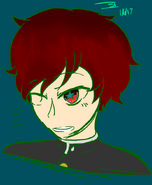 A wonderful drawing by the amazing Oni!

An adorable Kisekae by Pistachio!

Yet another adorable Kisekae by Josh!

Hitoshi if he was in the Martial Arts Club 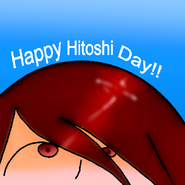 A birthday fanart by Blue