Spends most of her time browsing the Internet on her phone.

Pretends to be a positive person, but in private, only says negative things about others.

Secretly, her favorite activity is operating a hate blog on the Internet.

Hoshiko Mizudori is a female student who attends Akademi High in Yandere Simulator.

Hoshiko has long blonde hair that is tied into a wavy ponytail. Her hair fades into turquoise at the end and she has green and turquoise streaks in her parted bangs. Her eyes are green. She wears the default uniform unless customized by the player, except with a shorter skirt, along with loose white legwarmers and pink panties. She has a heavy tan and wears green lipstick, as well as blush and green eyeshadow. Hoshiko also wears a green hoodie around her waist, green and turquoise scrunchies on her wrists, star hair clips in her hair, green nail polish, and blue earrings. She also wears a green bookbag decorated with stickers and pins. Her bust size is 1.1, and her eye type is smug.

Hoshiko is a Phone Addict. If a camera is pointed at her, she will strike a cute pose. If she discovers a corpse, she will take a picture, text the police, and run out of school. If she witnesses the player commit murder, she will take a picture of Ayano, along with the crime scene and proceeds to flee from the school, while texting the photo to the police. If Ayano does not kill her before the timer is up, she will receive a game over. The player must then crush her phone, or they will be caught. She is also a bully, who (along with the other bullies) will bully the student with the lowest reputation at school.

Hoshiko Mizudori is different from the other members of the bullies. She has no excuse for her behavior, such as receiving a poor upraising, having an inferiority complex, or being a former victim. She is simply a cruel person. The one and only thing that she cares about is her own personal gratification. Nothing else matters to her, especially not the thoughts and feelings of other people. She doesn't use any form of rationalization to convince herself that she is justified in harming others; the pure enjoyment she gets from doing so is reason enough.

With that said, Hoshiko understands the importance of keeping her urges and actions secret from others, so she has mastered the art of being a social chameleon and pretending to be a normal, well-adjusted person. It is only when she is alone with a victim that her true, sadistic nature is revealed. The other bullies are the only people that she feels comfortable being "her true self" around.

When Hoshiko and the rest of the bullies are ganging up on a victim, Hoshiko often tries to convince the other bullies to do things like burn their victim with lit cigarettes. The other bullies always have to talk her out of it. If Hoshiko was the boss instead of Musume, each of their victims would have permanent scars.

Hoshiko's model with the rest of the bullies. 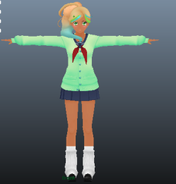 Hoshiko in "Bullies and Phone Addicts in Yandere Simulator". 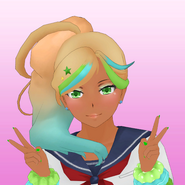 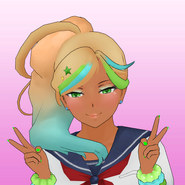 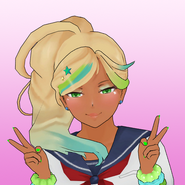 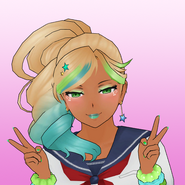