A very violent female delinquent who appears to know Osoro and has loyalty at her. It seems she's now the leader of the Delinquents, succeeding Osoro. Ever since the loss of her leader, she became vengeful and wanted to avenge her death by beating the culprit. Careful yourself, if she finds out that you're responsible of Osoro's death, well... I'm pretty sure you know what will happen...

Black with a purple streak on her left

Humoura Konduo is a recurring antagonist and one of the students that currently attends Akademi High School in GhoulGirls90's Fanon. She is currently the leader of the Delinquent Gang.

A very violent female delinquent who appears to know Osoro and has loyalty at her. It seems she's now the leader of the Delinquents, succeeding Osoro. Ever since the loss of her leader, she became vengeful and wanted to avenge her death by beating the culprit. Careful yourself, if she finds out that you're responsible of Osoro's death, well... I'm pretty sure you know what will happen...

Humoura was the daughter to a wealth family but was constantly neglected due to having very poor skills and she had a brother who has perfect intelligence and smarter than her that became favorite by their parents. One faithful day, it was at the time where her brother was going to have science fair contest because he was being lauded as a genius and offered the chance to show his science fair experiment where Humoura was very frustrated for not being like her brother. However, she ends up accidentally destroying her brother's experiment, causing it not to work properly. On the next day, the college admission team came to look at her brother's experiment but they unfortunately saw it wasn't working, so they denied his entry into a university. The brother was incredibly upset but soon discovers a empty bag of chips. Being assumed to be planning to sabotage him, Humoura was angrily confronted by her brother. Overhearing this, she was also confronted by her father as well for apparently trying to ruin the chance of her brother entering into his dream college. Humoura tries to convince that she didn't do it on purpose, but sadly, they did not believe her. She was then thrown out of the mansion by her father, telling her that she is no longer welcome to their home and she should find someone else's home who can tolerate her before slaming the door. Heartbroken, an Humoura broke down in tears and felt hopeless.

Aftermath of her disownment, she spends her days walking around the town/streets doing nothing else. Growing tired of walking, Humoura stopped by the alleyway. However, it turns out to be a territory of some delinquents as she was soon confronted her. They rudely told her off for being in their territory and she tries to apologizes for it but they angrily tells her that it won't cut the trouble off. Finally, when a delinquent says 'Why don't you go back to your mama and papa, pathetic girl!', it made her remember how she's been badly treated by her family and disowned her. She aggressively then attacked the delinquents, to their shock. Surprisingly, Humoura overpowered them and they all lost to her. There, Humoura started to talk like them. The beaten delinquents, however, got eventually impressed at her and offered her to join them. Having nothing else left to her, Humoura decides to accept it and became a delinquent.

One month later since she joined the Delinquent Gang, she had a thought of getting revenge on her family for making her suffer.

Humoura has black hair with a purple streak on her left and purple eyes. She appears wielding a shinai serving as her weapon. Her bangs cover her left eye. She wears a red surgeon mask with the Venus symbol on it. She wears a high collared white blouse worn under a green-lined black blazer and slight dark green bow, accompanied with a dark grey skirt and green-striped shoes as the current school's uniform attire for students.

Humoura is shown to be extremely violent, tough and powerful. She is disrespectful, unfriendly and very hostile to anyone, except her gang. She does not care that there is consequences of hurting anyone. She does not consider anyone as a friend with the exception of her gang. As Osoro's successor of being delinquent gang's leader, she is leaderly and wants every gang member to follow her orders and maintain as a delinquent like her. She does not tolerate seeing any of her members being nice to anyone else such as witnessing Moriko beginning to act friendlier with other students (if her task is completed), because she believes delinquents don't make good acts with other people. She also hates being told what to do, especially, by the authority figures. She feels no fear that being disrespectful towards teachers would anger them as well. Humoura would also threaten to attack a teacher if she loses her patience with them like attempting to scold her for misbehavior.

Humoura has the Violent Persona. She will become annoyed and cover her face angrily if a camera is aimed at her. If she witnesses murder, she will run towards the culprit and fight them. If she also catches Ayano taking panty shots, she will also attack her.

Humoura fully respects Osoro and was very loyal to her. She never questions and would not always hesitate to do what her leader told her to do or what she wants.

In the aftermath of Osoro's demise, Humoura was anguished but also very angered and thinks there could be a culprit who is behind her death. She promises her late leader that she will avenge her death by getting revenge on whoever killed her who will taste her wrath.

Humoura does not know much about Ayano and is also unaware that she was actually the one who is behind the massacre at Akademi High, especially her Osoro's death. She doesn't also like her because she finds her an authority figure as a student council member.

If Humoura happens to discover that Ayano killed Osoro, she would become furious and plan to lure her into their trap and openly confront her, making her pay for murdering her leader. When this outcome happens, Ayano should be able to notice that the delinquents will start staring at her while passing by or stalking her around, planning something a threat to her. 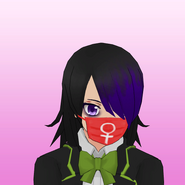