-Become cold after the death of his sister

Before Eri's death, Jiro was a happy person, he talked to everyone and feel protected when he was with his sister. After her death, he became cold and mysterious, he dosen't talk to anyone anymore.

Jiro and Eri lived in a orphanage since they were babies. They were brought by their parents before they had mysteriously disappeared. Jiro and Eri were adopted when they were very young and lived happily together. Unfortunately, Eri was missing for days until Jiro find the body of his sister in a lake, the cause of her death was asphyxia, Jiro found many fingerprints on her neck. Her killer was Kaiyo Ao.

Jiro is a japanese teenager boy who have spiked dark and light gray hair with two dark red strands and gray eyes with little thick eyebrows. He wears the default male uniform with black shoes. He wears a light brown shirt with light pink ring and a golden necklace with a golden cross. He have a scar in his face who get it when he was playing wrestling with Eri.

Jiro and Eri was close siblings and very loveable to each other. They played many games together. Jiro get devasted when he have found Eri's corpse.

Jiro have a great relationship with his adopted mother, he is very close to her and he become happy when he talks with her. After Eri's death, she tries hard to protect him.

Jiro and Hiroki have a good relationship. They act like they are biological father and son, they hang out every weekend.

Jiro is best friends with Kaiyo and showed to know about her crush to him, he showed to be very annoyed when she moves him away to his younger sister. He likes to have a conversation with her, but he started to distrust her after noticing she was happy after his sister's death.

Jiro and Harushi go out everytime they have the chance. They have a crush on one another and sometimes they go to a isolated area to kiss each other. She was the only girl who could comfort him and give hugs. 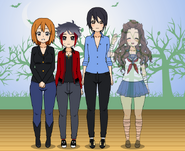 Jiro and a ghost Eri with their adoptive parents 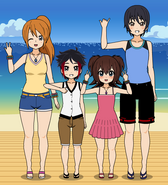 Infant Jiro and Eri with their adoptive parents in the beach
Community content is available under CC-BY-SA unless otherwise noted.
Advertisement