Fanatically obsessed with martial arts films since childhood. Joined the Martial Arts Club to be more like his heroes.
Primarily interested in re-enacting moves from his favorite films, rather than actually developing proper self-defense skills.

Juku Ren is one of the male students that attend Akademi High School.

Juku had messy orange hair with small tufts on the sides. His eyes are light orange. He wears the default uniform unless customized, and a white headband with Japanese writing if the Martial Arts Club is active.

As of the February 19th 2019 Build, Juku has dark brown hair, olive eyes and fair skin.

Juku is a Teacher's Pet. He will give a suspicious look before crossing his arms if a camera is pointed at his face. If he discovers a corpse or witnesses a murder, he will report it to his teacher.

Juku was implemented in the November 15th 2015 build.

His name "jukuren" (熟練) is a play on words. In Japanese, it can mean either "skilled" or "proficient", although this does not reflect Juku's self-defense level, which is "very weak".

His female counterpart is Shima Shita. 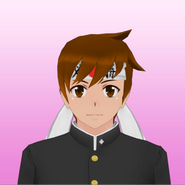 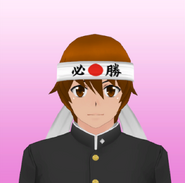 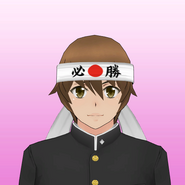