The setter of the Akademi High School Volleyball Club. He is surnamed as "The King of the Court", because he had the habit of always scolding other people who didn't do the right things in the volleyball net. Because of that, people started to stop spiking his sets, and people began to avoid him. Because of that, Kageyama gained anxiety and began to stay away from the others, only caring about volleyball. Now, he learned about his errors, and he is trying to be less bossy around his friends. Spend most of his time training volleyball in the gymasium.

Blood, violence, being harassed, any of his friends in danger, snob people, not being able to be a good setter, no one being there to spike his sets, drama, delinquents, arrogance, bullies, bullying, injustice, people who dislike volleyball, occult, supernatural things, animals, socializing (a bit)

Student / Member of the Volleyball Club

"The setter of the Akademi High School Volleyball Club. He is surnamed as "The King of the Court", because he had the habit of always scolding other people who didn't do the right things in the volleyball net. Because of that, people started to stop spiking his sets, and people began to avoid him, and that resulted into Kageyama gaining anxiety and begining to stay away from the others, only caring about volleyball.

Now, he learned about his errors, and he is trying to be less bossy around his friends, clubmates and people in general. Spend most of his time training volleyball in the gymasium."

Kageyama has black hair that is cropped short, with a fringe that hangs just above his dark blue eyes, and he have a pale skin.

His height and impressively sharp glare are said to be his most prominent physical features. He is of a muscular build.

Kageyama is cold, not really social, but he can also be caring and a bit clingy to the ones he care about. He is not that smart in school, but in the volleyball net he is extremely smart, tricky and have fast reflexes. He is also very fast and is able to jump very high, and have many techniques that he hasn't show to the public yet, making him a "genius" on the court.

Kageyama use the Heroic Loner persona. When a camera is pointed at him, he will do a suspicious pose, however if the player have a high reputation he will show a weak smile to the player. If he witness murder, he will attempt to aprehend the player and that will triger a struggle mini-game. If he win, he will pin down the player, trigering a Game Over. If he sees a dead body, he will report it to a teacher. If he sees blood pool, he will get disgusted, alert Hinata and then they will both run out of the school.

— The task of Kageyama.

Kageyama has known Hinata since they were both first year at Karasuno High School. He quickly became found of the younger boy and they both became rivals and friends real quick. Over the year, Kageyama developed strong feelings toward his rival but decided to keep it a secret until they finish their 1st year. He decided to confess to him the day his two close friends, Daichi and Sugawara, graduated.

He truly loves him and would be very devasted to learn his death or anything similar.

As she is Hinata's sister, he apreciate her but finds her quite annoying at times. He doesn't really know how to interact with kids, but they have a really strong bond and Kageyama would also be very devasted to learn her death or anything similar/

They both met at the Spring Tournament, and they fought at the Nationals against each other. Sadly, Johenzi High lost and Karasuno High won, but Kageyama, Hinata and Terushima quickly became aquaitances. At first, he consider him as a rival and an obstacle he need to defeat.

After he decided to move and that he changed schools, he unnexpetedly reunite with Terushima and his new girlfriend, Ikari. They decide to let the past behind and start becoming friends and later on, best friends. If anything ever happen to him, he will be very sad and depresed.

After he reunite with Terushima, Kageyama will meet Ikari, Terushima's girlfriend. They will quickly become close friends, and she will tell Kageyama her anxiety about the fact that Terushima has been flirting with other girls while he is still dating Ikari. Kageyama can either chose to side with Terushima, or Ikari, however that choice will be up to the player.

Once he manage to find a volleyball club at his new school, he meet someone practicing volleyball in the gymnasium. The vice-president of the volleyball club was training alone, and so Kageyama decided to try and ask him if they could train together. From that day on, Yuko and Kageyama became close friends and realised they had a lot of things in common. 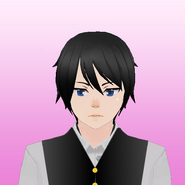