-Is very clingy and jealousy

Kaiyo is very clingy, jealousy and annoying when she is with the person she likes, she is very sadistic and have a perverted mind. She is pretty annoyed to the fact her sister is dead and she never settled with it, being the reason why she bothers with everything. Kaiyo showed some psychopath signs when Eri Senri was close to Jiro Senri, Kaiyo's crush. She is very strange and show happiness after killed Eri.

Kaiyo lived with her mother and her older sister in a small town before going to Buraza Town. Her father got murdered by a police officer when he was robbing a bank when she had five-years-old. After his death, her mother worked harder to take care of her daughters, but she moved to Buraza Town to find a new job when get fired. Kaiyo helped her mother selling paintings she designed herself but stopped when her older sister started working as a model, she got disappeared when she was coming out of a tavern in a late night, her body was found inside of her crashed car. Kaiyo and her mother was disturbed and devastated about Shian's fate.

Kaiyo is a Japanese girl with a blue hair tied with a pair of dark cyan butterflies in down pigtails and purple eyes, her fringe is cyan and she have a purple hair clip. She wears the default female uniform and have dark and light pink striped socks with black and red shoes. She have a purple bracelet in her right arm.

Kaiyo is best friends with Jiro and have a huge crush on him, she is very clingy towards him and move him away from other girls, specially away from his younger sister. She loves to pass time with him and is very obsessed to him. She feels secure when she is talking with him. Jiro thinks she is weird and began to distrust her after discovered his dead sister.

Kaiyo and Eri was classmates and doesn't liked each other, Kaiyo was very jealous when Eri was talking with Jiro, Kaiyo moved him away from her constantly when Eri wanted to talk with him or she stalks the siblings when they have a conversation alone. One day, after Eri was getting out from school, Kaiyo talked with Eri, asking her to follow her to talk, after Eri accept, she and Kaiyo walked away from school. She was taking Eri to a forest who is a bit far from the city, she asked Eri to turn her back, after this, she began to stab her multiple times in the leg and strangled her to death, after Eri's death, she threw her corpse in the lake. After this occurs, Kaiyo seemed very happy and anxious.

Kaiyo have a good relationship with her mother, helping her with things that she can't do alone. They comforts themselves after Shian's death.

Shian taked really care to Kaiyo, they was very close and showed affection constantly. After Shian's death, Kaiyo never settled and is very disturbed knowing about her sister will never be with her anymore.

Kaiyo and Chihaya is classmates and was very close, Chihaya had a crush on her, but Kaiyo did not know. Kaiyo was the only one who could calm Chihaya down and have a skinship-like affection, Chihaya was kind and friendly only with her. After Chihaya discovered Kaiyo was having a crush on Jiro, she got a long distance from her and started to treat her like she treats the other people. Chihaya was afraid of Kaiyo because of her exaggerated happiness with Eri's death. 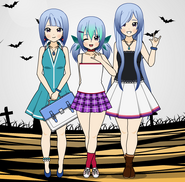 Kaiyo with her family

Kaiyo and her mother comforting each other after Shian's death