Spends most of her time texting on her phone.

Pretends to be a sweet girl, but in private, her personality is quite nasty.

Secretly, her favorite activity is gossiping and spreading rumors.

Kashiko Murasaki is a female student who attends Akademi High in Yandere Simulator.

Her hair was soft and poofy. Her mother was Japanese, but her father was of another race.

Kashiko doesn't actually know what other race she is mixed with. Her father has never been a part of her life, and her mother doesn't have any details about her father's ancestry.

Kashiko is ashamed of her mixed heritage, and has always done everything possible to keep her hair neat, tidy, and straight.

As a child, she was often the only mixed-race student in her class, and was often bullied for the color of her skin. From middle school onwards, she adopted the gyaru style because it allowed her to disguise herself as a rebellious Japanese girl who tanned her skin for the sake of fashion, and avoid being identified as mixed-race.

She acknowledges that pretending to be a gyaru girl might work only in a school setting, and definitely won't last forever. When she eventually parts ways with Musume, she will never return to "hiding" who she really is, and will embrace her poofy, fluffy hair.

When it comes time for her to "shed" her gyaru "disguise", she wouldn't want to spend any time in a transitionary state between gyaru and "mixed-race girl not hiding her identity". She would dye her hair back to black right away. She longs for the day she can just be her true self without having to hide anything.

It's uncertain whether or not Kashiko will grow as a person and leave behind her bullying ways, or remain nasty throughout life. Out of all the bullies, however, she is the one girl who is most likely to wind up with Gema, if the two of them are able to develop into better people.

Kashiko has dark blonde hair that is tied into a wavy afro ponytail. Her hair fades into purple and she has a split fringe with a light purple streak on the right side and a purple clip shaped like a candy on the left. She has a heavy tan, wears purple eyeshadow, and pink lipstick. Kashiko wears the default uniform unless customized by the player, but with a shorter skirt, along with a purple hoodie around her waist and loose white legwarmers. Her panties are pink. She wears pink and purple scrunchies around both of her wrists, purple nail polish, and a purple bookbag decorated with stickers and pins.

Kashiko is a Phone Addict. If a camera is pointed at her, she will strike a cute pose. If she witnesses the player commit murder, she will take a photo of them, along with the crime scene and proceed to flee from the school while texting the photo to the police. If they player does not kill her before the timer is up, they will receive a game over. She is also a bully, who (along with the other bullies) will bully the student with the lowest reputation at school.

Kashiko Murasaki is a mischief-maker and an instigator. She enjoys spreading gossip and rumors so that she can watch the outcome from afar, silently proud of herself for successfully manipulating the actions of others. Her gossip often causes permanent damage to the relationships of other people, but she doesn't care. She rationalizes her behavior by insisting that her actions are merely harmless pranks, and that any consequences are the fault of others who are not handling her pranks well enough.

Kashiko's model with the rest of the bullies.

Kashiko in "Bullies and Phone Addicts in Yandere Simulator". 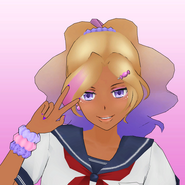 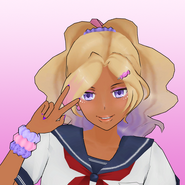 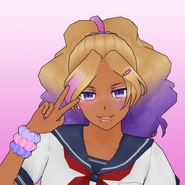