Kizana Sunobu is the third upcoming rival in Yandere Simulator. She has not been implemented yet.

On the inside, Kizana is quite ugly. But her acting ability and beautiful looks may just be enough to catch Senpai's heart. She might just be the "Juliet" to his "Romeo."

Kizana was always meant to have fancy purple hair, according to YandereDev, as purple is the color of royalty. In the FAQ, YandereDev has stated that her hairstyle has not yet been finalized. Since she is a club president, she will wear a "Red Armband of Leadership" on her left arm with the 'comedy and tragedy' masks, representing her place in the Drama Club.

Her elegant, violet-purple hair is styled in twin drills on either sides of her head with two red roses in front of them. Her eyes are a pretty shade of purple. She also wears red lipstick. Kizana wears the default school uniform unless customized by the player. Her purple thigh-high stockings are patterned with red roses and vines.

Kizana has an alternate design as well; an albino look. In this design, her color scheme is altered to fit that of an albino. Her hair is changed to an icy white tinted with blue. She wears bluish white lipstick to match. Her eyes are changed to a pale pink. However, this is only a planned feature, and is not yet implemented.

As she is unimplemented, Kizana's full personality is unknown. She's described as being arrogant and egotistical, perhaps even distasteful. Her short-term goal is to become the most popular girl in school, and her long-term goal is to become the most famous actress who ever lived. She's best described as a "himedere," which consists of the Japanese words 姫 (hime) meaning "princess" and デレデレ (deredere) meaning "lovey-dovey." These characters, usually females, are described as snobby, confident and think of themselves as royalty, hence the name.

YandereDev may change her personality to one who strives for originality, rather than an arrogant snob. He says this would probably make her a more likeable character.

As she will be a rival in the future, Kizana will have a crush on him from the second she lays eyes on him. She is convinced that he will be a perfect addition to the Drama Club, which perhaps will get his mind off of the events that happened in the first two weeks of gameplay.

In the future, Yandere-chan can matchmake Kizana with her suitor.

Kizana is envious of Megami because she wants to be the most popular girl in school. There is a possibility that Kizana may hate Yandere-chan if her reputation is very high. She dislikes anyone more popular than her, as they make her feel inferior.

Kokona admires Kizana and joined to Drama Club to learn how to be more like her. This annoys Kizana, as she doesn't want anyone imitating her unique style. Her task (planned for the final game) is about how Kokona "stole" her hairstyle, even though Kokona had it first. The player has an option to accept her task or decline it. If the player accepts, they must find a way to make Kokona change her hairstyle or perhaps, change Kizana's.

Though it is unknown at the moment, YandereDev has said that Kizana's routine will put her in close proximity to Senpai or other students. YandereDev has stated she is out of school for the first two weeks due to having a broken bone and needing recovery. 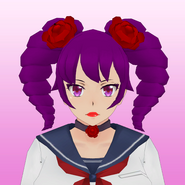 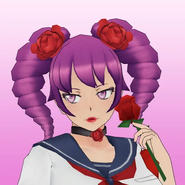 Kizana holding her arms out on a stage as roses fall to her feet. 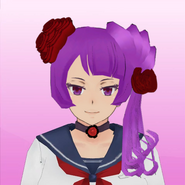 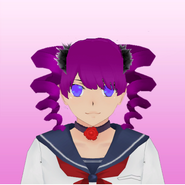 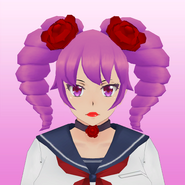 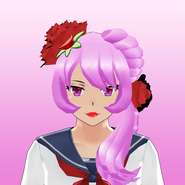 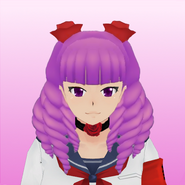 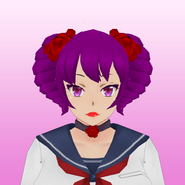 Made by Bluecats
Community content is available under CC-BY-SA unless otherwise noted.
Advertisement