Kokona has dark purple hair that is tied up into twin drills with purple beads. She has mint-green eyes.

Kokona is very petite and short at 4'9- making her the shortest member of the Rainbow 6. She's curvy for a girl her age. Kokona wears the default uniform with purple stockings. She wears a desaturated purple cardigan.

Kokona has the Social Coward persona. If she witnesses murder in front of a crowd, she'll run and hide.

If she witnesses murder alone, she'll freeze and beg the murderer to spare her. If you spare her, she doesn't lower your reputation, she just cowers whenever you're near

If Saki Miyu is murdered in front of her, she will apprehend you.

Kokona is sweet and kind to others- even to people with low reputation, unlike Saki. Unless Saki tells her to bully them, she will be nice to them. She is well-liked around school for her cute mannerisms and appearance. Her popularity in school often makes her the target for flirting, or it would if Saki wasn't always around her.

Kokona is also very gullible, easily being tricked into lies and scams. She's naive, which makes her a perfect puppet for someone who wanted to use her- or maybe break her mind.

Kokona's task is to get her notebook back. It's a violet color with light violet stripes. You can find it in Yui's desk.

Kokona is Saki's best friend and would do anything for her. She knows Saki's soft side and wouldn't hesitate to help her. They're like two peas in a pod, and are inseparable. Kokona is one of the few people Saki trusts and actually likes.

Kokona and Koharu get along. Kokona often tells Kokona to get some sleep so she doesn't look so tired. Koharu however barely listens to Kokona's warnings. Kokona's a bit cautious of telling Koharu secrets due to her gossipy nature.

Kokona is often tutored by her. Kokona trusts Mei and wouldn't hesitate to help her.

Kokona is Yuna's "cooking buddy". Kokona would trust Yuna with a secret, albeit not a dark secret.

Kokona only bullies Yui because Saki tells her to. She doesn't actually hate Yui- despite what Yui thinks.

Kokona's cousin. They get along quite well, Kokona admiring Kiyoko's acting, and Kiyoko admiring Kokona's sweet demeanor and popularity in school.

Kokona thinks of him as nice. She grows a crush on him on the second week

Kokona and Kanako sit next to each other in class. Kokona has no idea of how perverted Kanako actually is

The person calling her on the phone.

Kokona actively avoids Makiko because Saki and Kiyoko tell her to.

Kokona without hair dye and contacts 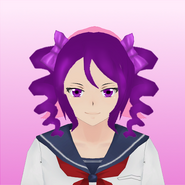