Spends most of her time taking selfies on her phone.
A former bully who pretends to oppose bullying to avoid from being targeted of bullying
Secretly, her favorite activity is shaming and ridiculing other people, but eventually decided to give it up.
Sorry for you to hear this, but she also survived the incident that she's still also alive.

Being bullied, getting into trouble, violence

Kokoro Momoiro is a supporting character and one of the original students before the incident at the Akademi High School in GhoulGirls90's Fanon and the one of the deuteragonists in Yandere Simulator: SNAP Mode. She is formerly part of the Bullies.

Spends most of her time taking selfies on her phone.

Secretly, her favorite activity is shaming and ridiculing other people, but eventually decided to give it up.

Sorry for you to hear this, but she also survived the incident that she's still also alive.

Kokoro had a large, polyester blonde ponytail and large bright pink bangs that curl down the sides of her head. She has a heart bow and two flower clips on top of her head. She has caramel eyes and pink makeup. She has tanned skin. She has scrunchies that are colored light pink, purple, and light blue around both of her wrists. She has a bright pink jacket tied on her waist and uses dark magenta nail polish. Her bust size is 1.2.

Kokoro was like the bullies last year, having no remorse of other people being hurt.

One year later, having actually survived from her wounds made by Akademi High School massacre, Kokoro revealed to Simon who resents her for being a bully last year that she only had to keep up the facade of being a bully in order to avoid being targeted by Musume and her friends because she was a previously a victim of severe merciless bullying at her last school and didn't want to be abused again. She actually felt remorse in reality that she had to let herself harm others.

Kokoro has the Phone Addict Persona. She will strike a cute pose if a camera is aimed at her. If she witnesses murder or finds a dead corpse, she will snap a picture and run away from school, while calling the police. She cannot participate the fight.

Later that day in a week, Kokoro will be seen in her old self at Akademi's entrance and her conversation with some students can be overheard. If Simon talks to her, he will be surprised to see her alive and fine as well as Kokoro too to see him. Both of them would explain the whole story. At first, Simon will express his disappointment towards her for being a bully last year, but Kokoro felt remorse about that and has a reason why and will also tell him. Simon will always forgive her and also befriend her.

Musume and the Bullies 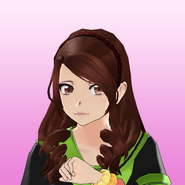