Claims the bandages on her face are the the result of being attacked by a wild animal shortly after the school year began.

There are rumors that the true reason she wears bandages is because she is regularly beaten by a family member, and was blinded in one eye during a domestic dispute.

Kokuma has dark navy blue hair cut short into a pixie-cut similar to Rei Ayanami's from Neon Genesis Evangelion. She has a shaggy fringe that is longest between her eyes. She wears a grey bandage over her right eye. Her left eye was originally a mauve purple, but is now olive green. Kokuma wears the default uniform unless customized by the player, and a moon choker if the Occult Club is active. Her eye type is serious, and she has the default bust size of 1.

Kokuma is a Coward. She will hide her face if a camera is pointed at her. If she witnesses murder, she will beg to be spared in exchange for her silence. If she is spared, she will run home, but she will not call the police. 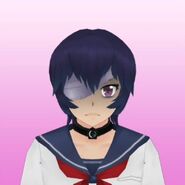 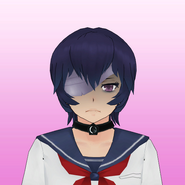 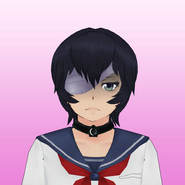