Fulfilling her duties, being alone, reading, relaxing, being a Student Council president

Losing, harassment, Shiromi's immaturity, seeing students misbehaving, the delinquents, Ayano, losing to Megami in election, being not a president, being a failure, being hated

Kuroko Kamenaga is a canon female student that attends Akademi High School. She was a member of the Student Council. She was ultimately defeated and killed by Ayano, along with Megami, Shiromi, Aoi and Akane when attempting to stop her from invading Akademi High.

A disciplinarian student who acts like a teacher. She may be fully respected for her extreme seriousness in some situation, but most of students don't like her and can't tolerate her unfriendly behavior towards anyone who makes mistakes. She does not tolerate people who have immaturity.

There is a rumor that one of the students is been majorly scolded by her for always messing around and making mistakes too many times. According to Info-chan, she is impressed that she thinks the student may become fed up and stand up for himself aggressively by telling Kuroko off if scolded too far.

Kuroko acts as a strict disciplinarian. She is extremely serious, mature, smart and has a short-temper, which she can get angered easily by those students who act poorly or making mistakes. She is also like a teacher because Kuroko is shown to sometimes treat some students like as if they're her students. She is often envious and never seen happy, smiling or laughing. Because of her behavior, most of students felt offended or afraid of her around them, which is why many of them don't like her but still respects her for how well she does her duties. Most very likely, this could be the reason why she lost in election since Megami is also very smart and intelligent but also very friendly than her, they voted her instead of Kuroko.

Kuroko has a grudge towards her for winning the election as a Student Council president, which shows that she had a jealousy on her. Megami wasn't aware of this since Kuroko kept it secret as she doesn't also want Megami to know her negative thoughts about her. She still respects Megami for being a popular student and doing her duties very well. Because of her harsh treatment towards others, most of students find Megami very friendlier than Kuroko, so they voted against her and like everyone else voted Megami as a president instead.

Kuroko often scolds Aoi and disapproves her of using intimidation when confronting students who breaks the school rules.

Kuroko dislikes Shiromi's casual attitude. Sometimes, Shiromi doesn't takes things seriously which irritates and annoys Kuroko. However, there are times they can get along with each other well.

Kuroko has a postive terms with Akane. She never gets angry at her because she behaves well and never also fails her duties. 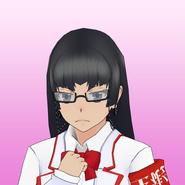