Yandere Simulator Fanon Wikia
Register
Don't have an account?
Sign In
Advertisement
in: User's Fanons, GhoulGirls90's Fanon, OCs based on characters from other franchises,
and 5 more

Defeat, her victims escaping her, failure

Assuming that you are here in this school to find your friend, yes, she's here. I want to inform you that it is Lady Sacamotra who kidnapped your friend and being responsible for her disappearance for days. If you're wondering who Lady Sacamotra is, she is the matriarch of the Sacamotra Family. She is also the one who just locked you up here in this place. I'm also going to warn you that she is not easy to deal with and she is highly a threat to you and your friend. She has a mutant powers that can most likely kill you and she'll also go eat you like a snack if she ever sees you. Take your risk trying to strike at her but I warn you that you can't destroy her. The best tactic is to keep out of sight of her and if you see her on your eyes, try to hide immediately before she sees you. You probably should find your friend and ensure her safety as soon as possible and get out of this place. There's no really telling that she might be planning something dangerous to your friend.

Lady Sacamotra is a countess who is the matriarch of the Sacamotra. This woman somehow made a virus and succumbed herself to infection that turned her into a monster or mutant and gave her the ability to elongate her fingernails into razor-sharp claws. She is the former employee of Ring shop and apparently, she has a behavior that represents like she has some kind of mental disorder because she was acting strange. Due to her behavior, she was ultimately fired for being disruptive.

She was planning to turn everyone in the world into monsters, which includes you. I don't know how brave you are if you are to face her, but you cannot beat her in fight because she has incredible strength and usually, she'll use her claws to rip you apart. Though, you can temporarily defend yourself from her by attacking her with whatever weapon you have, but as like I said, any of your tools won't kill her and you would have to hide from her when she gets in your sight.

Lady Sacamotra is extremely insane, violent and murderous. She can be also cannibalistic because not only turning her victims into monsters but she also eats them as if they're snacks. Because of her behavior, she is highly considered dangerous and a threat. With Lady Sacamotra being invincible, she cannot be killed but the player can temporarily defend themselves from her with any weapons they have.

Lady Sacamotra is first encountered at the Dormitory after Hanako shot a zombie with failure to save Inkyu at a room. Without a word, she will proceed to attempt to either rip Hanako apart with her claws, devour her or infect her with a virus she has. While Lady Sacamotra can't be killed due to her being invincible, Hanako can temporarily defend herself from her by attacking her with any weapons that stuns Sacamotra. Her attacks is very dangerous because it deals a massive damage to Hanako's health. Hanako can also hide from Lady Sacamotra by losing her sight on her. Note that since Hanako has also to protect Sayonika, Natsuki and Yuri with her as Sacamotra will also attack them and if any of them is killed by her, it will result to a game over. She will also grab Hanako or the trio in attempt to damage their health, while they try to break free from her. For Hanako, it will trigger a QTE. 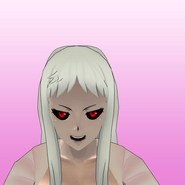