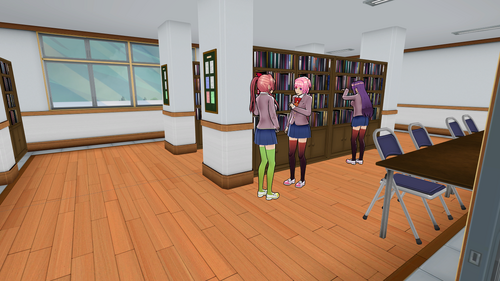 Literature Club is one of the current clubs in Akademi High School. It is one of the new clubs that was founded by Sayonika Nayomi.

Literature is a club where students meet to discuss books and the craft of writing. Some members could choose to share their writings during the meetings, therefore starting many discussions. At times, they critique each other's work and offer suggestions. This club is mostly filled with students that has an high interest of writing poems for their friend or clubmate.

Sayonika Nayomi is the president and founder of the Literature Club. She is bright and cheerful girl. She is also smart, intelligent and helpful, although, she is very incapable of defending herself from any physical confrontations against any enemies.

Natsuki Hayomori is the vice president of the Literature Club. If the president is absent, she will serve as the substitute leader for their club. She also has an ability to kick or ban students if sees them as a problem or threat to their club or the members.

In the non-canon event of Yandere Simulator: SNAP Mode 2, Natsuki angrily removed Yuri from their club after they had an heated argument each other that resulted Yuri to drive into depression and develops a personality disorder. Worse, it has also made her completely lose her sanity who burns in rage and swears to seek revenge against Natsuki for kicking her off her favorite club.

Yuri Hiroki is a member of the Literature Club. She is a serious and mature girl who often argues passionately and aggressively with Natsuki over their differing opinions on writing styles.

In the non-canon event of Yandere Simulator: SNAP Mode 2, Yuri is removed from the club by Natsuki after they had an heated argument. As a result, Yuri drove into depression and develops a personality disorder. Worse, she has also completely lost her sanity that made her insane, burns in rage and swears to seek revenge against Natsuki for kicking her off her favorite club.

Shinji Dansei is a member of the Literature Club. He's the only male member of the club. He is Sayori's childhood friend who have known each other since they were little kids.

Sayori Hinamoto is a member of the Literature Club. She is a very cheerful and bright girl who often gets upset when her clubmates get into argument and usually steps in to stop their fight. If the argument became so heated, Sayori would be too distraught to break up their fight. She is Shinji's childhood friend who have known each other since they were little kids. She is often teased by Shinji and embarrassingly calls him 'meanie' but finds it funny.