Yandere Simulator Fanon Wikia
Register
Don't have an account?
Sign In
Advertisement
in: OCs Based On Their Creators, Adults, AkariYamamoto2436's OCs,
and 15 more

A young business man who is married to Miyanna Kirami and is friends with the Saikou Corp. He is known for his charming look, which is the reason he wears a red mask.

The colors Red, Orange, and Yellow

His employees being air-headed and nice

Sports (Except Basketball, Soccer and Baseball)

Nasu-Ka Ame for the swimsuit idea

This page has mentions of suicide. Please ask 911 and a therapist for help if you are experiencing suicidal thoughts.

Lucas is an OC created and owned by AkariYamamoto2436 that represents him in the YS universe.

Lucas is a adult and is a CEO of an electronics company and is a friend of the Saikou Family.

Lucas has red hair styled in a short high ponytail, and brownish-pink eyes. He wears a red vest. He has bandages on his left arm and his stomach, exposing some of his chest. He wears black pants and black laced boots with red bordering and a red mask with white bordering and two white stripes in the front of the mask. He has a tattoo on his arm, hidden because of the bandages.

Lucas' demon form is fully white, with red hints. His demon form has long, messy red hair with a orange streak and is tied into a braid. He has dull red wings and has red claws. He has two black armbands on both sides of his arm and wears a long-sleeved hoodie, hiding red gloves and dull red pants with leg accessories and shoes with the same color. His demon form also has a black belt with a golden chain attached to it.

Lucas still looks the same as his regular form,but with white wings and a tail.

His Mega-Angel form has large wings and has white bandages with golden blood. He wears white shorts with gold lace and wears a gold armor-like outfit.

His Ultra form has white hair with golden fade. His left eye turns yellow and his right eyes turns white. He has very large golden wings, a golden halo, and a golden armor-like outfit.

His child form still looks like him, of course, he is a child so he wouldn't look like the actual Lucas. His child form has red hair, tied into a ponytail similar to Yuna Hina's. He wears a cross necklace and a white shirt, he has white pants, black boots, and white thigh-high socks. He also wears an orange star hairclip.

He looks the same as his regular form, But has an idle and walking animation of Kuroko Kamenaga. He doesn't wear the hat nor the mask, but his hairstyle is still the same. He wears a black suit with a red tie, red vest, grey pants and undershirt, a Saikou watch, and black shoes with golden chains.

Since Lucas is a boy, the genderbended form is a girl. His genderbended form's name is Luna. She has red hair styled in twintails, black earrings, orange eyes, a black cardigan, with a golden necklace, she has white pants and red boots.

His past appearance has red eyes with no glow, he always has a fake smile when people are in his house, but if they leave, he's in a devastating frown. He's almost naked but wears bandages and white shorts to cover his privates and his body due to the abuse he has with his family. He also has blood on his face.

His swimsuit is Red fading to either Yellow, White or Orange. It has 2 black stripes.

He used to be the CENTER of attention back then, but when his sisters were born, his parents didn't give a crap about him, hated him like he's just some stray dog.

His sisters always lie and always says that it's his fault whenever they did something.

Cause of this, his sanity decreased from 100% to 8%. He doesn't have the shine in his eyes becuase of his depression. All of this happened for 12 years, but he decided to start doing what his family did to them.

He started hitting his sisters, pushing them down the stairs and started to bully them.

Until... His younger brother died while at surgery. The whole family blamed him for his death.

Then he started to become.. A delinquent. He started to distance himself and his sanity decreased from 8% to 1% He now doesn't even give a crap about most people.

Until.. He found Miyanna. They bond each other and is in the same situation. They commited suicide by jumping off the roof in Kimiruku Middle School (if you're experiencing it, please ask for help and get therapy) Then Lucas found Maikeru, his brother. They all had fun but... Lucas and Miyanna came back to earth, started to date, engaged, then married, and that's how their family started. Then they gave birth to Laura, Alyssa and Yohan.

Both of their families tried to reunite with them but both of them know it was a trick to make them suffer yet once again so they rejected the "reunion" both of families did.

Lucas' sister, Diana, died and went to hell, her other sister, Tiffany was devastated and wanted to apologize and Lucas accepted it.

He is a friend of Ichirou Saikou. His middle child, Yohan, is engaged to Megami Saikou. Meanwhile, The youngest child, Laura, is engaged to Megami's brother, Kencho. Alyssa, the oldest child is the Takeshi Family's heir to their business like Megami. Lucas used to be in a paint job, but he was fired. He started his own business about electronics and sold about 2 million electronics in the first year of his business. The Saikou family was impressed and they befriended Lucas. Now, they're the most popular electronic companies in Japan. Their headquarters is also near to each other, Since both of their headquarters are in Shisuta Town. Saisho is often nice to him as well. He is also a prodigy for his business.

In the 4th week, he is kidnapped by the Occult Club and Miyanna is supposed to find him. The reason the Occult Club kidnapped him is to "destroy" his demon form by torturing him. This is also because Kencho payed the club 3,000,0000,000¥.

But, since Lucas is invincible, he could escape the building and randomly teleport to the gates of the headquarters.

His demon form might even kill or scare the Occult Club members in which to protect him.

At the 8th week, the Occult Club members kidnap him again and he no longer has any escape. Miyanna is blackmailed by Oka and Kencho saying to go to an abandoned building to save Lucas. Both Miyanna and Lucas are fallen angels.

The Occult Club is ready to torture him. But Miyanna comes on time and then turns into Maki, Her demon form and jumpscares the Occult Club and saves Lucas. The Buraza Town Police has arrested the Occult Club. and then Lucas has filed a case for kidnapping.

He seems to be overprotective over his own wife, sometimes even jumpscares the perverts with his demon form to stop their "pervy" personality and be traumatized for life.

Alyssa, the heir of his company, is now engaged to Kizano Sunobu.

This leads to the family befriending the Sunobu family.

On the 12th week, The Ronshaku family kidnaps Laura and is forced by the family to give all their money. With the help of the Saikou Family, Laura comes back home safely and the family is arrested.

He wakes up on his headquarters on 5:59 in the morning.

He eats breakfast and opens his laptop to do his work.

Later, he does a meeting with his employees.

He now stays in the office working on his laptop and signing documents.

Laura now goes in the headquarters and visits his office.

Laura now goes out to go on their reserved house in the headquarters.

Lucas goes to their Chief Secretary and gives her the documents he signed.

Lucas wears his mask and goes out to check his business branches.

He now does his work on his laptop again.

His wife. They both love each other so much. Sometimes, he gets too overprotective to her when perverts come around her.

His children. No matter what they did wrong, nobody could stop Lucas from defending them. Due to this reason, they love him so much as their parent. Sometimes, if they got in very big trouble, he would not defend them, and say "What you did was wrong!"

Friends with them for 2 years. Lucas only knows that Kencho is planning to get rid of Megami. However, he pretends that he doesn't know about this.

His daughter, Laura, is kidnapped on the 12th week and to give Laura back, Lucas would sell the company. However, Lucas had defeated the Ronshaku Family and, Laura is bringed back safely.

WARNING!!! This part of the page has mentions of suicide!!

(Btw all main quotes are in my userpage)

Lucas' full look with his wings and tail hidden.

Lucas' full look with his wings and tail not hidden. 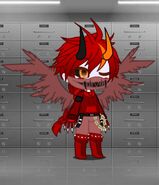 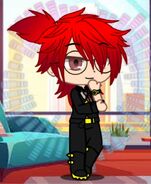