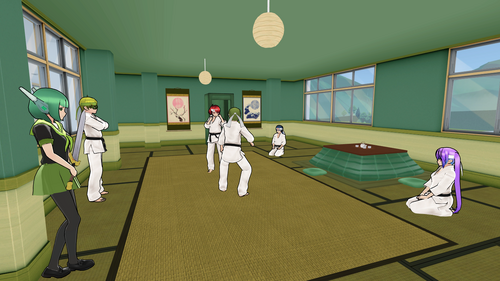 Martial Arts is one of the current clubs in Akademi High School.

The Martial Arts is a club where students are taught to perform fighting techniques and to have a powerful strength that allows to defend themselves from their enemies that wanted to harm them. Raibaru was the former leader of the club before she appointed Budo as a new club leader after defeating her.

Simon Nakoruru is the president of the Martial Arts Club. He is also a member of this club last year and the only original member. Because he has completely learned everything from his late former mentor, he is responsible of teaching his apprentices how to do martial arts techniques. When a member fails, he would nicely tell them to never give up and keep trying until they become better.

Susumu Kimito is the vice president of the Martial Arts Club. She is very strict, mature, serious and seems to be quick-tempered. She often yells at her clubmates and even abuse them by slapping when they make mistakes, which made them fear her while Simon is absent so he does not know that Susumu actually has a bad temper despite being good at martial arts. Her behavior caused other club members to remain silent about the recent conflict between her and them if ever Simon wonders how they're doing in their club in the previous day and pretended that everything was fine.

Yui Rio is a member of the Martial Arts Club. After witnessing Simon's fighting skills when he fought off the delinquents to save the bullied student, she starts to admire him and is inspired to do the combat moves he did that'll help her defeat her own enemies. Because of this, she felt interested and considered joining in Martial Arts club, much to Simon's gratefulness for her participation.

Robot-chan is a member of the Martial Arts Club. She is used as a Martial Arts teacher to assist Simon of teaching his apprentices of martial arts techniques. She is made to have human behavior traits that allows her to feel emotions.

Raibaru Fumetsu was the former president of the Martial Arts Club before Budo. She was a very good teacher, and taught many students self-defense, even if they weren't actually members of the club. Many students underestimated Raibaru due to her cute and girly appearance. A lot of students challenged her to duels, believing that they could easily defeat her...but until then she never lost a single match. She was very proud of her 100% win streak.

Budo Masuta was the president of the Martial Arts Club. He was Simon's late mentor and one of the popular students in Akademi High, known for his friendly and approachable attitude, his powerful physique, and his undeniable skill at martial arts. Ever since he became the leader of the Martial Arts Club, he has maintained a 100% winning streak and is considered to be the strongest student at school. Budo became the leader of this Club after defeating the club's previous leader, who resigned after being beaten by her own pupil. He very rarely speaks ill of others but has been known to express a strong distaste for bullies and delinquents. He is quick to rush to the aid of anyone that is being harassed by other students.

At the first week of school in 2020, Budo had a new pupil "Simon Nakoruru" who became interested into joining his club. His teaching actions for martial arts eventually made his new pupil developed a powerful strength as his. It was thanks to him, he helped Simon realize he should never give up and keep trying until he gets better and better that made his grades became higher, unlike before.

Sho Kunin was a member of the Martial Arts Club. He was most promising disciple and plans to make him the next leader of the club once he graduates. He was also witnessed in a national news last year defending a woman who was being mugged by a group of three men, and carried her to a hospital afterwards.

Mina Rai was a member of the Martial Arts Club. She was a shrine maiden at local shrine and came from a very traditional family, and adheres to the Shinto belief system. Ever since her shrine was threatened by thugs, she has been determined to develop martial arts skills in case it becomes necessary to protect herself or her shrine.

Shima Shiya was a member of the Martial Arts Club. She had the big interest on performing combat movements so she settled for joining this club. She is aspired to become a professional fighter so she wants to learn martial arts techniques from her master, Budo Masuta.

Juku Ren was a member of the Martial Arts Club. He was fanatically obsessed with martial arts films since childhood. He joined the Martial Arts Club to be more like his heroes. He is primarily interested in re-enacting moves from his favorite films, rather than developing proper self-defense skills.

Two members sparring while other three members are taking a break for tea.

The club members spectating Robot-chan who is demonstrating them of martial arts techniques.