Known for irritating her classmates and teachers by constantly asking foolish questions. Stubbornly insists that she is a video game character who can see beyond the fourth wall of the game she's allegedly in.

Midori has long green hair with parted bangs. Her eyes are bright green. She wears the default school uniform unless customized by the player, along with green knee-high stockings and green panties. She has the default bust size of 1, and her eyes are round.

Midori is a Phone Addict. If a camera is pointed at her, she will strike a cute pose. If she witnesses murder, she will take a photo of Ayano, along with the crime scene and begin to run out of school, while texting the photo to the police. If the player does not kill her before the timer is up, they will receive a game over. Though she cannot participate in physical fights against the player, she can be a potential threat due to her being a phone addict.

According to YandereDev, Midori is very stupid. She constantly asks stupid questions, in reference to the fans who send YandereDev dumb emails. In older builds of the game, the player could hear Midori talking to herself while emailing YandereDev on the rooftop. But emailing YandereDev isn't Midori's only personality trait. She has her own interests, too. She loves nature, video games, and her favorite foods are anything green.

This section is for trivia related to Mom0ki's SoundCloud. 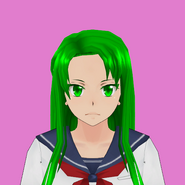 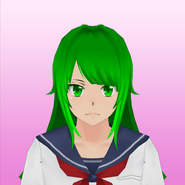 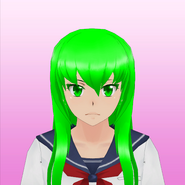 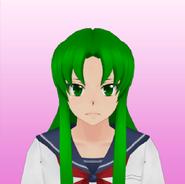 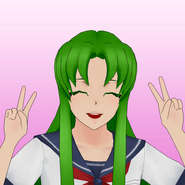 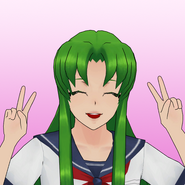 Midori texting on the rooftop.

An illustration of Midori emailing.

Midori looking up from her phone. 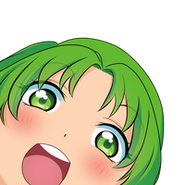 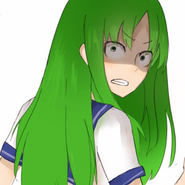 A portrait of Midori. 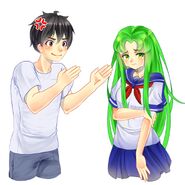 Midori giving a knife to YandereDev.

An illustration of Midori by Mulberry. 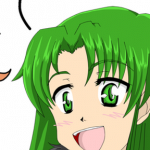 by It's a COCONUT!
Community content is available under CC-BY-SA unless otherwise noted.
Advertisement