President of the Light Music Club. For most of her life, she was a shy, timid, quiet girl. During the previous school year, she surprised everyone by suddenly changing her appearance and personality overnight. Vocalist for her band, the Strawberry Thieves. Practicing guitar.

Miyuji Shan (her real name being Miyuji Shibakoya) is a canon character in Yandere Simulator and the leader of the Light Music Club.

"Last year, Miyuji was one of the quietest students at school. A shy bookworm, she usually kept to herself and avoided most social situations. She joined the Light Music Club purely to avoid the negative stigma that is associated with being clubless, and rarely participated in club activities or spoke to her clubmembers. The Light Music Club was a perfect match for her, since it was widely known for being the most relaxed and easygoing club in the whole school.

One day, towards the end of the last semester, Miyuji arrived at school with a completely new personality and totally different sense of fashion. She was full of energy and self-confidence - the complete opposite of her previous self. She convinced the president of the Light Music Club to give her ownership of the club, and immediately changed its focus from soft mood music to a blend of punk rock and pop. Everyone who had been acquainted with her was completely shocked by her sudden, unexplained metamorphosis.

At the same time that she unveiled her new persona, she also began to demonstrate exceptional skill with the electric guitar. She quickly attracted the attention of other musically-talented students, and it didn't take long for them to form a band - the Strawberry Thieves. They regularly thrill other students with performances in the Music Clubroom, and are quickly developing a fanbase among both students and faculty alike. The Strawberry Thieves are widely expected to have an extremely successful musical career once they graduate.

Anyone with the slightest knowledge of musical instruments could instantly tell that Miyuji's newfound skills could not have possibly been formed overnight. She must have been practicing for years to develop such skill; but how had she kept it a secret, and for what purpose? What drove her to completely change everything about herself, from her fashion sense to her personality? Miyuji herself refuses to answer any questions about her "metamorphosis", replying in riddles whenever she is asked about the subject."

Miyuji has short, messy black hair with reddish-pink streaks kept in a side-tail. She has a bass clef hairpin, a thick black bracelet on her right wrist, and an armband of leadership with an eighth note on it. She wears the default female school uniform choosed by the player, unless customized, with reddish-pink gradient stockings. Her eyes are rose pink. She also wears black lipstick and has two piercings on her right ear. If the light music club shut down, she will go back to her shy personality, her hair will be all black, she won't any make up anymore, and she will have a sad walking animation.

Miyuji's personality is Social Butterfly. If she witnesses murder, she will run to a heavily populated area and call the police. If the light music club shut down, she will go back to her old and shy personality. 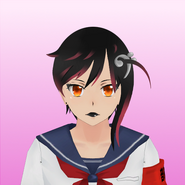 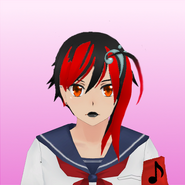