Violent/Neutral
Heroic Loner (if her task is completed)

A female student who used to be verbally bullied that resulted her to become a delinquent, believing that violence would avoid getting hurt by anyone ever again. However, she is known to be one of the very neutral female delinquents who sometimes feel remorse for her violent actions, seemingly regret for deciding to be a mean person from now on and sometimes hesitate to hurt anyone.

Being bullied, bullying others (sometimes), being threatened

Black hair with a red streak on her left

Hair and face texture by NoicePotato

Moriko Sakaki is a minor antagonist, later determinately a supporting character and one of the students that currently attends at Akademi High School in GhoulGirls90's Fanon.

A female student who used to be verbally bullied that resulted her to become a delinquent, believing that violence would avoid getting hurt by anyone ever again. However, she is known to be one of the very neutral female delinquents who sometimes feel remorse for her violent actions, seemingly regret for deciding to be a mean person from now on and sometimes hesitate to hurt anyone.

Moriko has black hair with a red streak on her left and red eyes. She wears a high collared white blouse worn under a green-lined black blazer and slight dark green bow, accompanied with a dark grey skirt and green-striped shoes as the current school's uniform attire for students. As a delinquent, she appears wielding a pipe serving as her weapon and wears a surgeon mask with 'X' mark on it.

If Moriko's task is completed, she will not have a pipe with her and no longer wearing her surgeon mask anymore.

Moriko used to be very friendly and nice before she got bullied by other students in different school. Ever since after she got bullied, she begins to become violent and had managed to beat those who harassed her. Even finding some others are just friendly, Moriko still shows a violent behavior towards them. She was soon noticed and witnessed her tough behavior by the delinquent gang who approached her and finds her being fit to join them and have decided to recruit her as one of them. She would sometimes feel regret about her violent actions.

If Simon has her reformed by completing her task, she may return to her old self again and students would no longer fear her anymore due to improvement of her attitude.

Moriko uses the Violent Persona. But unlike other delinquents, she gives a suspicious look if a camera is aimed at her, instead of being annoyed. If she witnesses murder, she will run towards the culprit and fight them with her weapon. She will also attack Ayano if she catches her taking panty shots on any student.

If her task is completed, her persona will become Heroic Loner. Unlike her former persona, she will attack the murderer without a weapon if she witnesses them killing anyone.

Moriko's task is for Simon to help her reform by convincing her to change back to her true self. She will be rude towards Simon at first, but she will eventually warm up if he talks to her further about her past and starts being nice towards the player and other students as well, when completing her task. Once her task is completed, Moriko will no longer bring her weapon, wear surgeon mask, will wear red cardigan for one day). Her reputation will also improve. If you talk to her, she will respond nicely from now on. She is also still capable of physical confrontation.

Moriko is loyal to Humoura as her leader and usually follows her orders but sometimes hesitates to do so. Though, she never questions her leader and wouldn't want to end up angering her.

If Simon had Moriko reformed, Humoura would call her as a 'traitor' as she will be infuriated towards her for not being like one of them anymore and she and her gang will turn against her. Because Moriko is being a former delinquent, she also learns not to fear anyone like Humoura and her gang and she wouldn't be still afraid to fight anyone to defend herself who really meant to fight or harm her. 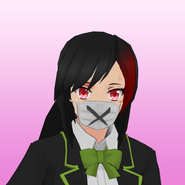 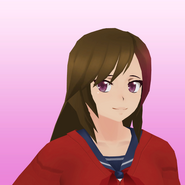 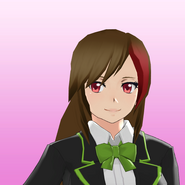