They prefer not to say

Naomi Harada is an OC created by Redandsymmetry.

Naomi has short brown hair with parted bangs. Their eyes are light blue. They wear the default female uniform and a martial arts headband. They have a bust size of 0.2.

Naomi's task is to help them with their training. This will lead to a mini-game. The mini-game has a bar with green and red, and a white slider. The green is good, and the red is bad. The player will have to try to get the slider in the green. If they do, the task is completed and Naomi will be their friend. If they fail, then they will have the option to try again. They can only try 3 times in one day.

Budo Masuta - The president of Naomi's club. He taught them everything they know about martial arts. Naomi wants to become stronger, but is afraid to ask Budo for extra training. 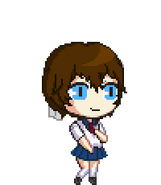 A sprite of Naomi by Third-Impact-Is-Coming