A Prodigy who has plans to be an Operations Manager at Saikou Corp. His reputation is well earned; he has many female admirers. Kiyoko Tatsuhara befriended him in his first year, and they also became pretty good friends.

Nasu-Ka Ame or Naishade Amewara was a prodigy at a young age who has great plans of being an Operations Manager of Saikou Corp. He has a connection to Saikou Corp. in his best friend, Kencho Saikou and his sister Megami Saikou. He gets 100’s on almost all of his tests. There’s an unsavory rumor that he made the Heartbreaker along with the Science Club.

Nasu-Ka and Yandere-Chan are very similar. They both are Yanderes, after all. They share one difference however, she is devoted to her lover, while Nasu-Ka is devoted to saving his friends. He also has become very good at faking his emotions. If you complete his task, he will teach you a little on how to conceal your emotions.

Nasu-Ka can be seen changing his hair twice, from Shoku Tsuburaya’s hairstyle or Otohiko Meichi’s. His second hairstyle is actually speculated to not be him, but an apparent twin named Kyosei Ame, although, this is just a rumor. He wears a hoodie under his Gakuran (Made by Shiro Torayoshi). He has dark brown hair (Light in second hairstyle) and has light purple eyes. He also wears a cardigan for his casual outfit.

Nasu-Ka has a crush on Kaori Suto, who is his love interest.

Kiyoko Tatsuhara - Kiyoko is one of Nasu-Ka’s closest friends and she snuck in a vote to make him a Student Council Member (relevant towards plot).

Juku Ren - Juku and him have been friends since middle school. They watched a lot of Martial Arts movies together.

Mayu Kagoraya - Mayu is one of Nasu-Ka’s closest friends, although she has not told him about her other personality.

Nasu-Ka is a very special case, if you do end up accepting his task and giving Juku his CD, then he won't attack you, instead, he'll give you special dialogue. 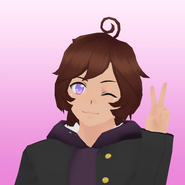 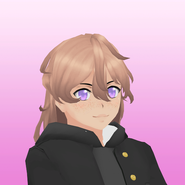 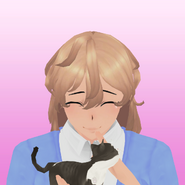