A cowardly girl who is often easily gets scared of any spooky stuff. Her hobby is she can cook food but none of her friends know about it due to being very shy to tell them.
She secretly also works as a maid at Maid Cafe in Buraza Town.

Okubyona Meido is a character and currently one of the students in Akademi High School in GhoulGirls90's Fanon and the tritagonist in Yandere Simulator: SNAP Mode 3.

A cowardly girl who is often easily gets scared of any spooky stuff. Her hobby is she can cook food but none of her friends know about it due to being very shy to tell them.

She secretly also works as a maid at Maid Cafe in Buraza Town.

Okubyona wears a high collared white blouse worn under a green-lined black blazer and slight dark green bow, accompanied with a dark grey skirt and green-striped shoes. She has red eyes and red hair with two slight long pigtails. She also wears a maid hat since she is a member of the Cooking Club and an employee at the Buraza Town's Maid Cafe. If the Cooking Club got disbanded, Okubyona would no longer wear her maid hat at school.

Okubyona is friendly, kind but also cowardly. She is not brave enough and incapable of facing the spooky things she sees and tends to run away from it. Because of her coward personality, some students might bully her by making fun of her by scaring her such as surprising her with "Boo!", show her any spooky stuff they have like monster mask, etc. Despite her cowardice, she is good at cooking and loves this as her hobby. Okubyona is very shy and she secretly works at Buraza Town's Maid Cafe, which none of her friends nor classmates know about it because they're unaware and she decides not to tell them about it as she thinks that they might say that she is not old enough to work at Cafe that might embarass her.

If she is forced to face her nightmares, Okubyona might ask for advice to her friend.

Okubyona uses the Social Coward Persona. She will strike a cute pose if a camera is aimed at her. If she witnesses murder, she will beg the culprit to spare her life and swears that she won't call the police, then runs away from school. If she witnesses a dead corpse, she will run away from school and call the police. She cannot participate any physical confrontations against murderers.

During school is not in session, Simon can encounter her at Maid Cafe in Buraza Town street. Simon will recognize Okubyona being a student from Akademi High as well as Okubyona will recognize him too being the main popular student of their school. Okubyona will be shocked and panic that her secret is literally exposed to him, but Simon tries to calm her down. Simon asks her why she also works at the Cafe. Okubyona says that she had to as to raise money because her family is really poor and wanted to help them. She will also admit that she kept this a secret from her friends, teachers or anyone else because it is against the rules for her to have a job without having a work permit. She did not want any of them to know about this because it would most likely get her in trouble. Okubyona begs Simon not to tell anyone about it, which he promises her. Simon can ask more about her. Once completely done, Okubyona will befriend him and serve him a food.

Okubyona strongly cares for her family. She felt really bad that her family is having problems due to shortage of money that disallows them from buying important stuff they really need. Not wanting them to suffer, Okubyona decided to get a job to raise money but it required her to keep it secret from anyone else as she didn't have a work permit from her school.

Okubyona is been friends with Ramori since they first met each other at Buraza Town's Maid Cafe. She is always hesitant to ask her for help because she didn't want her to get involved with her problems but when she knows she can't solve her problem on her own, she reluctantly does so. As they both share a same situation about money problems and family issues, they promised each other to keep their secrets about having a job without work permit unrevealed as it would get both of them into trouble.

Aside from Ramori, Simon is the only other person whom Okubyona could trust of keeping her secret safe. She first met him, when accidentally bumps into him. Like other students at Akademi High, she appears to know Simon as a most popular student of the school. At first, Simon later unexpectedly sees her working as a maid at Buraza Town's Maid Cafe where he was going to have a dinner that made Okubyona to feel shocked and panic because she feels he'll report her to faculty for having a job illegally due to not having a work permit. However, Simon actually refuses this and didn't really want her to get into trouble for this. He promised Okubyona not to tell anyone about her, much to her relief.

Because Info-chan can get every information from everyone or everything else, she most likely knows that Okubyona has been keeping a secret of working as a maid illegally. This might become a high disadvantage to her, because Info-chan would have Ayano snap a picture of her working at Maid Cafe to blackmail her by telling her to stop working at Cafe or she will expose her secret. If this outcome happens, Okubyona's life will be ruined and her family would suffer even more badly. To prevent this, Simon should probably try his best to keep on eye on Ayano and if he does see her attempting to take a picture Okubyona working at Cafe, he will stop her in rush. 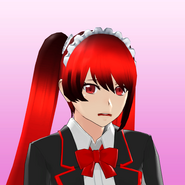 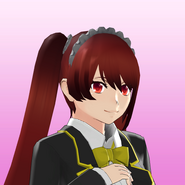 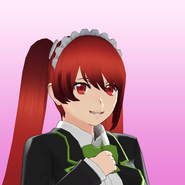 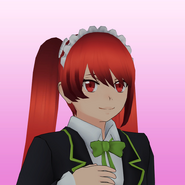