Osana Najimi is the first official rival of Yandere Simulator and will be present in the game the first week of gameplay (week 1). She is a "tsundere", a character that acts rude and haughty normally toward their loved one(s) (tsun), but can become affectionate or lovey-dovey (dere).

Osana Najimi is Senpai's childhood friend. She has a crush on Senpai and plans to confess her romantic feelings for him under the mythical cherry tree on Friday. The player must stop her, otherwise the confession will be successful.

"Osana and Senpai have been close friends ever since they were very young children. They have always lived next-door to each other, and have always walked to school together.

Despite their closeness, Osana is quite rude and harsh towards Senpai; she is always easily irritated and quick to anger when he is around. The reason for this behavior is because Osana has developed romantic feelings for Senpai, but she is afraid of letting him know how she truly feels about him.

She doesn't want him to know how she really feels about him, so she is mean to him at almost every opportunity. However, her true desire is to confess her feelings to him underneath the cherry tree behind the school...and if nothing stops her, that day will come very soon."

Osana has long, orange hair kept in knee-length pigtails. She wears two pink scrunchies with white polka dots to keep her hair up, along with a small red ribbon on the right side of her head. Her bangs sweep to the left. Osana wears the default uniform unless customized by the player, along with salmon pink thigh-high stockings with white polka dots that match her hair scrunchies. She has the default bust size of 1. Osana also has a unique eye type exclusive to her only: Rival1.

Senpai is Osana's childhood friend. She does tend to be a bit bossy to him but they are still friends. She has a crush on him, which makes her one of the rivals that Yandere-chan must eliminate in order to have Senpai for herself.

Ayano sees Osana as a rival for Senpai's affection, and she will do anything to eliminate her, no matter what it takes.

Like Ayano, Info-chan despises Osana. She would like to see something bad happen to her, but it is unknown why she would want such a thing.

Raibaru is Osana's best friend. She follows Osana everywhere to protect her, just like a body guard. She fully supports Osana's feelings towards Senpai, and is willing to help Osana to get Senpai for herself.

Osana's suitor. He has a crush on her. It is possible to matchmake the two in order to keep Osana away from Senpai.

At 7:00 AM, she goes to the Courtyard and socializes with Raibaru in front of a tree.

She continues to talk with Raibaru until she suddenly receives her phone call at 7:30 AM (similar to Kokona's) Then she will head to near the bathrooms next to Classroom 1-1, with Raibaru peeking in the distance, after that is done. She will patrol all of the club rooms in school and give her opinion on them with Raibaru until she goes to class in Classroom 2-1 at 8:00 AM. At lunchtime, Osana will eat lunch with Senpai with Raibaru eating at the other side.

During Cleaning Time, she will clean the fountain in the Courtyard. After school, she will talk with Raibaru at the tree until 5:30 PM, when she meets up with Senpai and leaves school with him.

During certain days, she will have different interactions with Senpai and other. There will be some before school, during lunchtime, or afterschool with Senpai. On Wednesday, she will sunbathe with Raibaru and the bullies. 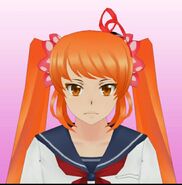 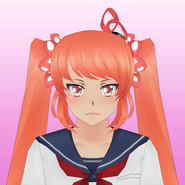 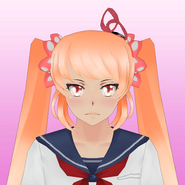 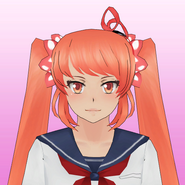 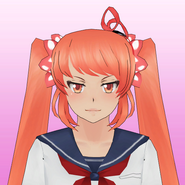 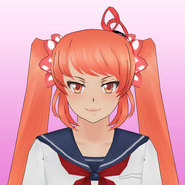 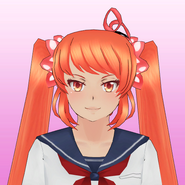 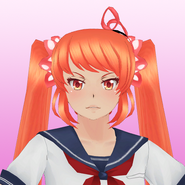 In the game and in art, both canon and fan-made. 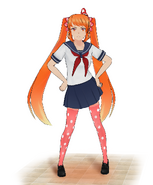 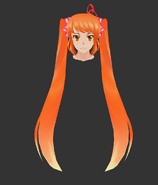 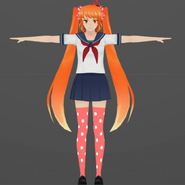 Osana as a Pokemon trainer by Kjech/Guillermo Varela Iglesias 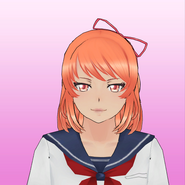