Placeholder Club Leaders, also known as Fake Club Leaders in the game's credits, are canon characters in Yandere Simulator. They are currently just placeholders for club presidents that have not been yet added to the game, and exist solely so the player can join their clubs and test out their mechanics and benefits before the true leaders are implemented.

Placeholder Club Leaders have grey hair with fringes that go past their eyes and nose, hiding their face entirely except for the mouth. They have pale grey skin. They wear a monochrome version of the default female uniform regardless of customization, and a "red armband of leadership" on their left arm. They wear knee-high white socks with black loafers, but it is difficult to notice due to their skin color. They also seem to be entirely female, as they wear a female uniform, speak in a female voice (a robotic one, mind you, but a female one nonetheless), and have bust size 1.

Placeholder Club Leaders seem to be flat, monotone and emotionless. They don't react to murder, screams or suspicious behavior, which may be due to their eyes and ears being covered fully by their hair or they're simply just robotic ghosts. This may also be the reason Info-chan does not recognize pictures of their faces (or lack there of). However, this would be odd if that is the case, as when the player speaks to them they seem fully able to hear what they say, as they turn in their direction upon interaction and respond to what the player chooses. 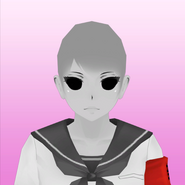 Their hairless portrait by MetalBreakerZ 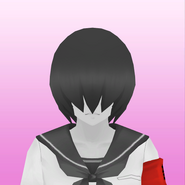 Their current portrait by MetalBreakerZ 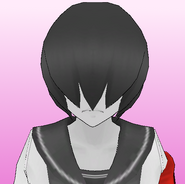 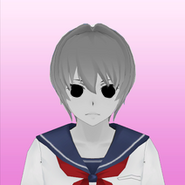 Kuuderehair By Kittythecatgirl
Community content is available under CC-BY-SA unless otherwise noted.
Advertisement