"Osana Najimi's best friend. The two of them spend almost all of their time with one another. It's worth mentioning that this girl was the leader of the Martial Arts Club last year. Don't get on her bad side; you won't beat her in a fight...unless you resort to underhanded methods."

Raibaru Fumetsu, also known as Rival-chan, is a female student attending Akademi High in Yandere Simulator. She is Osana Najimi's best friend, as well as her bodyguard. She was also the former president of the Martial Arts Club.

Raibaru wears the default female school unless customized by the player.

Raibaru has flushed cheeks, a soft smile, orange-amber eyes, and pale yellow-toned skin. Her orange golden hair is worn in two slightly curled pigtails. To keep her hair up, she wears ruffled pink and white polka dotted scrunchies and a purple ribbon at the top of her head. She wears blue and white uwabaki shoes with loose, white legwarmers. She has a bust size of 1.5, and a unique eye type called MO. Her appearance is a direct copy of Rival-chan, the placeholder rival that used to stand under a tree in the Courtyard.

Raibaru has the Protective persona. If a camera is pointed at her, she will not react at all. If she witnesses murder, she will run up to the player and effortlessly snap Ayano's arm, resulting in the APPREHENDED Game Over. If the player attempts to attack Raibaru, even with a stealth attack, they will still be apprehended with no struggle. If she finds a corpse on schoolgrounds, she will find Osana, run out of school with her, and call the police.

At 7:00 AM, Raibaru spends the first few minutes of the school day hiding behind a tree, watching Osana conversing with Senpai. Once Osana done with her event, she will meet Raibaru and the two will talk about how their conversation went.

After that, Raibaru will follow Osana to the school courtyard. They stand under a tree and talk for about 20 minutes.

The two friends will continue to talk until Osana suddenly receives a phone call at 7:30 AM. Osana will head to near the bathrooms next to Classroom 1-1. Without Osana knowing, Raibaru secretly follows her and watches her phone call from a distance. Once Osana is done, Raibaru offers to check out the clubrooms with her to take her mind off of it. They finish at around 8:00 AM, and then they go back to their classroom.

During lunchtime, Raibaru eats her lunch on the school rooftop, whilst spying on Osana and Senpai's lunchtime events. This gives the player an opportunity to poison her bento.

During Cleaning Time, Raibaru and Osana will clean the fountain in the courtyard. After school, she will talk with Osana at the tree until 5:30 PM, when Osana meets up with Senpai and leaves school with him, with Raibaru following along.

During certain days, she will have different interactions with Osana and others. There will be some before school, during lunchtime, or after school. On Wednesday, she will sunbathe with Osana and the bullies.

If Osana is dead or missing, Raibaru's routine will change. She will go to the school plaza and mourn the loss of her friend.

Osana is Raibaru's best friend. Raibaru is devoted to keeping her friend safe, and so she acts just like a bodyguard.

Last year, Budo Masuta managed to defeat Raibaru in a martial arts match, shattering her 100% win streak. After her defeat, she transferred the leadership of the club to Budo and quit martial arts altogether. For Budo's task, the player must ask Raibaru to train with the Martial Arts Club. 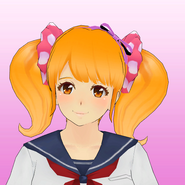 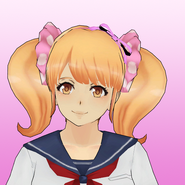