Ghostly Fate:
Being forced to murder innocent people, being threatened, the Ghost Rider, her friends in danger, William Tanaka, gossip

Ryoba Aishi is a minor antagonist in GhoulGirls90's Fanon and the main protagonist of Yandere Simulator: Ghostly Fate. She was Ayano's mother and Jokichi's wife. She was also a student at Akademi High School in 1980s.

The mother of Ayano Aishi and also used to be a student in the same school as her daughter in 1980s. She has lived in the same neighborhood for her entire life.

She always appears cheerful and friendly woman who seems to get along very well with everyone in her neighborhood, although nobody seems to know very much about her, not even her next-door neighbors. However, unknown to them, she is actually dangerous because she often threatens anyone to kill them when she sees them as a threat between her and her husband's love. She was the responsible of killing the first girl who seemed to have fell in love with her husband when she was a teenager.

She is a very private woman who never talks about herself, and never divulges many details about her occupation...but she's always willing to talk for hours about her husband and how much she adores him.

At the 2020s, Ryoba's death was suddenly reported to public. She died of unknown natural causes. Was she probably murdered by someone because they knew her true nature? Was she got arrested because she was caught red-handed for something and probably refusing arrest to avoid being separated from her husband, she tried to fight back at the police but only ended up gotten herself killed? To find out whatever killed her, Ayano must investigate the incident with the help of Info-chan.

The younger yakuza, currently a low-ranking member of the Yakuza Family.

Ryoba is a sweet friendly girl who has a very extreme light-hearted side to those who are friendly around her.

As a young yakuza, she considers herself at heart. When Ryoba was young and after being adopted by the Yakuza as her foster father, she began to idolized him and considers him to be her role model. The Yakuza, however, is very hesitant to let her join the Yakuza but eventually does because he could see how very brave and determined Ryoba is.

As she is enrolled to Akademi High School, Ryoba is also considered to be smart and intelligent, being able to do her studies so well that allowed her to become one of the popular figures in the school. She also gained some friendships from other students who start to like her and admire her. She enjoys spending time with her friends and cares much for them.

Ryoba is also somewhat brutal and tough towards her enemies who tries to harm her or any of her friends for no reason. She dislikes people who is corrupted by revenge filled with rage like William Tanaka but can be understanding of their problem that led them to it. She only does the violence, if necessary.

During in 1980s timeline, Ryoba was arrested by the three policemen when they were convinced by the Journalist about her actions back at the Akademi. She later eventually realized it was the Journalist who had witnessed her committing a crime. Ryoba had also managed to deceive everyone during in her court trial into thinking that the Journalist had falsely accused her for murdering a girl. Her lies had caused the Journalist's reputation to be permanently damaged and his career was over.

Outside the school time in 2021 timeline, Info-chan will learn the truth of Ryoba's death. She was fatally killed by his father after she had located his location to finish him off. Ryoba had injured badly the Journalist who tried to defend himself from her. When she was about to stab him to death, the Journalist realizes he has a gun with him in his pocket for the whole time so he hastily takes it out and shot through Ryoba's neck before she could stab him. She was then shot in the head when Ryoba still tries to kill the Journalist. With her death, Ryoba is brought to justice for ruining the Journalist's life.

Because Info-chan also cares about her father, she didn't want Ayano to know that the Journalist is the culprit for the death of her mother as she would possibly go and murder his father as a revenge for Ryoba's death. So Info-chan just tells Ayano that her mother was shot in the head by someone else without telling it was her father. 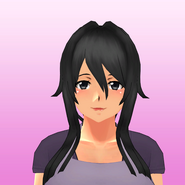 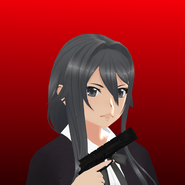