Thinking about editing? Im sorry but I can't let you do that This is one of S0ul245's OC's! You don't have permission to edit, unless you need to... add categories, fix gramma errors, typos or anything else that is considered a constructive edit

If you wish to edit anything else beside what was listed, please go to S0ul245's message wall and contact him.

Thank you! You can procceed

Sasha Nyuki is hardly respected around school, so she chooses to seclude herself just like her crush, but sometimes hang out with her friends.

She is in devastation of the loss of her two friends, but none of this didn't make her stop.

She is madly in-love with the colour neon-yellow, but prefers her crush more.

Sasha Nyuki (real name, Sashta 'Marise' Nyuki) is one of the non-canon female students that attend Akademi High, she is featured in such mods.

Sasha Nyuki wears the Sailor Moon Uniform, however the only difference is that her ribbon is neon-yellow instead of its original color, she also wears boxed panties and wears plain white long-kneed stockings.

She has long twin-tails similar to Osana Najimi wearing neon yellow scrunchies to keep her hair up.

Sasha Nyuki uses the Protective Persona, but she doesn't use all of Raibaru Fumetsu's programming. She will give the player a suspicious pose, if this is done enough times, she will get irritated by the player causing a reputation penalty. If she witnesses Yandere-chan murdering an NPC in front of her, she will be shocked, then she apprehends the player with no struggle.

Sasha Nyuki is quite calm at times and hardly interacts with people she doesn't know, she will only be around people she knows.

Sasha Nyuki's long-time best friend is Ashley Dachi she often gives advice on how she can get with Hazu, they both dislike Aryiku Mafu and Robotic-Nemesis.

They are both Rivals. They don't have a very good relationship with eachother, Aryiku uses her ally Robotic-Nemesis to prevent her from creating a bond with Hazu, which did fail.

Nem threatens Nyuki, making them both enemies for sure.

He is Sasha's love obsession, when she gets near him she instantly loses control of herself.

A few weeks after meeting him, Hazu wanted a friend, he thought Sasha Nyuki would be the best person for it. He met up with Sasha and they both had then become friends. Sasha still wants to be in a relationship, so she hides this till she thinks its time.

A month later, Sasha made the decision to confess to Hazu under the cherry tree, as Sasha Nyuki didn't expect Hazu said yes. This day onward they were a couple

Shiromi showed Nyuki around at school when she first arrived.

- When the player attempts to get her into gossip at an average reputation.

- Complimenting her at a average reputation

- Complimenting her at a low reputation

- Complimenting her at a high reputation

- When she discovers a corpse

- When she witnesses a murder

- Her V1 Task (Before entering a relationship with Hazu)

- Sasha reciving her answer from her V1 Task

- Her V2 Task (After entering a relationship with Hazu)

- Sasha reciving her answer from her V2 Task

- Talking to the next day if she witnessed a murder. 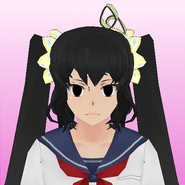 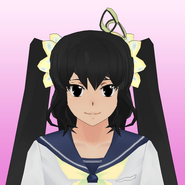 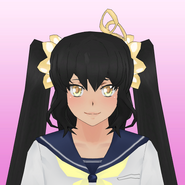 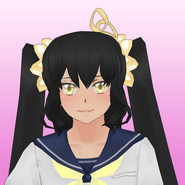 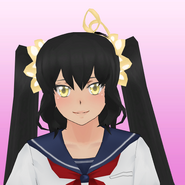 An alternate portrait of Sasha 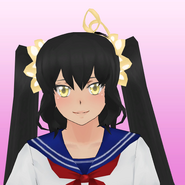 Another alternate portrait
Community content is available under CC-BY-SA unless otherwise noted.
Advertisement