Sei Saito belongs to the user Mysti. If you have any questions ask her. Critic is also recommended as this character could have room for improvement!

Sei has a rather pale complexion- bordering on eggshell white. Her build is similar to an ectomorph. She stands at a slightly taller height for someone her age.

Sei has medium-length desaturated pink hair. Her hair, could be considered "fluffy" but her hair is usually in braids. She has 1 sky-blue eye and 1 forest-green eye. Her face is rather heart-shaped.

Sei's uniform consists of the default uniform. She wears pale, robin's-egg blue stockings and black shoes. She's often seen with a mint-green headband in her hair.

Outside of school, Sei wears big puffy sweaters- usually with some sort of sassy saying on them. She tends to wear shorts at home, but if she's in public she wears long leggings.

Sei has the Quiet persona. If she witnesses a murder she will stay calm and pretend not to notice there's been a murder. However if her sister Amaya is murdered, she will apprehend the murderer.

Sei is often coldhearted and neutral to most people. She could be described as a 'kuudere'. She isn't open to most people, brushing most people off. Sei doesn't tolerate bullshit

She is loyal to people she's close to, almost to a fault. Sei is very quiet- often pretending to ignore things and is rarely called on in class.

Feel free to add your OC in her relationships. However, I would like to have a roleplay before the relationship

Sei is very protective of her- Sei tends to also be a comfort to Amaya when she's sad or hurting.

Her mother. They're a bit distant, but on good terms.

She's closer with him then she is with Keiko- he's the one who primarily raised her.

Sei and Kiyoko have a neutral relationship, not friends- not enemies, just neutral. Kiyoko doesn't bother Sei due to Sei being extremely hostile to most people, and Sei barely gives two shits about Kiyoko.

Sei hates Makiko- and the feeling is mutual. If Sei is mindbroken and given a weapon on Makiko's week, she will sadistically stab Makiko until she's dead.

Sei doesn't get why Saki's, well a bitch. Sei usually just ignores her. 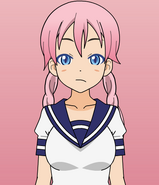 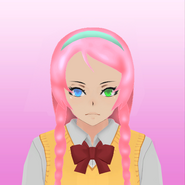 Sei's portrait, made by Fun

Sei as a magical girl. (dress:https://lilykai12.deviantart.com/art/Red-lady-Dress-Simple-hair-Export-681553477)