Ethnically and nationally Japanese, but obsessed with everything western; from western cartoons to western food. Loves to use English words in everyday speech. Believes he was a cowboy in a previous life.

Seiyo Akanishi is one of the male students attending Akademi High in Yandere Simulator.

Seiyo has curly, dark blonde hair with a long, curly strand on hair between his eyes. His eyes are a deep blue. He wears the default uniform unless customized by the player. While the Cooking Club is active, Seiyo wears a head scarf patterned with the United Kingdom flag, and an apron patterned with the United States flag. If the Cooking Club disbands, he will no longer wear his kerchief and apron.

Seiyo is a Social Butterfly. He will strike a cute pose if a camera is pointed at him. If he witnesses murder, he will run to a heavily populated area and call the police.

Seiyo is also known for being obsessed with anything western. His accessories all have western flag patterns, and he offers miniature burgers to students. He also believes he was a cowboy in his past life. 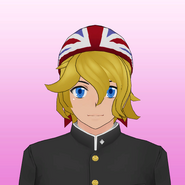